I don’t usually go much into my personal life on this blog but, I’ve got to tell you...

I’ve been away on holiday.

My bum fell out.

And it’s serious… which is why I’ve struggled to get much done since my last blog!

58 tumours in total. Apparently that’s quite a lot, but my oncologist said he can have them out by Friday! (He’s very talented.)

None of that was true, except for the bit where I admitted getting very little done.

At the time of my last post I was about to integrate the new ‘world’ with the rest of the project, but somewhere along the way I got lost in a mad whirlpool of my own design. It’s been a very circular, static few weeks.

The way I designed the world to begin with had some fundamental problems. I spent a very long time recently trying to resolve them, but with little success.

I eventually concluded the whole basis of my approach was flawed and decided to forego much of my previous work. (ahem, sound familiar?)

I’ll do my best to try and explain, but I’ll just warn you it might not make much sense.

From early on I’ve been striving to make things feel as seamless and connected as possible, As such, I’ve built interiors to perfectly fit the shell of the exterior, and there is no overlap between rooms, with an accuracy to within nanometres.

It’s a strange thought, but it just occurred to me it would be possible to accurately print the entire map out with a 3D printer.

Obviously the world cannot work as a single mesh, so it get’s cut up appropriately, buildings, floors and rooms are separate entities within a hierarchy, while everything else makes up the outside world. The outside mesh (and some large interiors) are cut into sections so only necessary sections can be loaded on demand, when the camera can see them.

I had prepared a whole suite of post-processing scripts that would do all of this (and more) automatically.

All I had to do was hit ‘export’ and in less than a minute it would generate hundreds of meshes, hundreds of materials and textures, etc.

Unfortunately, I didn’t realise quite how limiting this whole ‘seamless’ approach was, and as I got further down the path I found more and more scenarios where this idea of perfect topology broke down and became a problem.

I tried to fix it within my automated approach, but it became too messy so I’ve decided to do parts of the post-processing manually.

When I was writing my last post, I was fully expecting to have made significant progress by now, but obviously that didn’t work out.

While it’s been frustrating I’ve managed to keep a cool head and not get too upset.

But man… I’m not very good at this. I’ll keep going of course, but it’s pretty dispiriting to notice yourself making the same mistakes made over and over again.

I hope no one professional reads this blog...

Somewhere between all this messing about I decided to rejig the environment. Most notably I’ve enlarged the gap between the main building and the dormitory, I’ve re-included a small new building in the southern part of the  grounds that will function as a school-shop, and I’ve added a new section behind the sports field - an outdoor swimming pool! 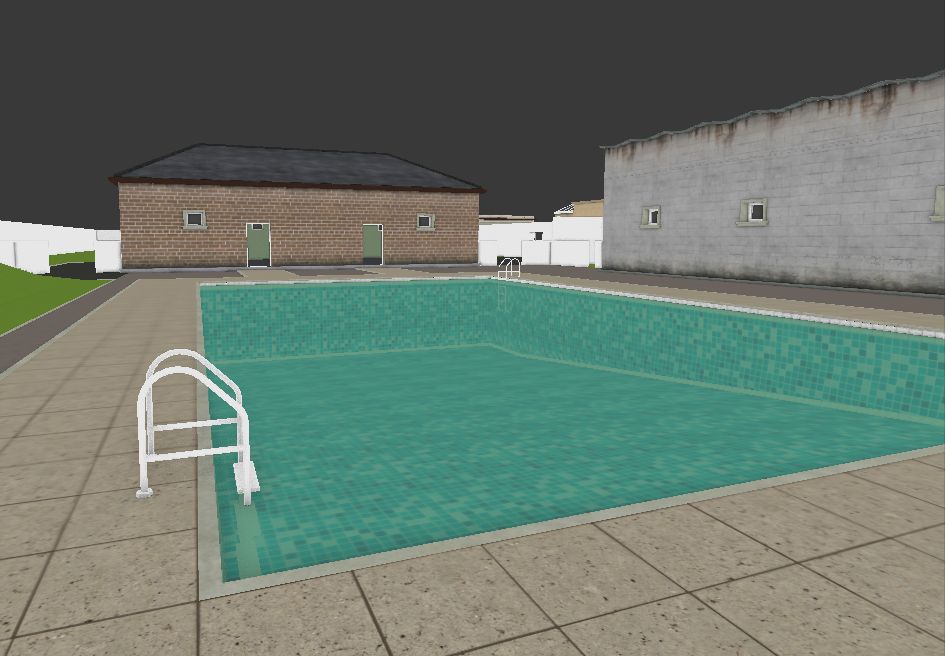 Sorry for the lack of updates recently. I’ll try and make them more frequent but it’s often dependant on having something new to say.

Hopefully next time won’t be another tale of bad decisions and regret! (and fictional ailments)