Apologies for the lack of an update. I’m glad to say though, that this is due to how busy I have been with work and not because there is nothing on which to update.

I revealed last time that I was working a new project that was neither Wasted Youth or Bunny Invasion. The reason for this was that Bunny Invasion had stalled quite massively, and hadn’t moved in a couple months.

My original intentions were to create a game in a day. That idea quickly went out the window and we decided on a premise. It was originally assumed it would take a couple weeks. Since starting it, it has been over a month and there is plenty of work left. This is mostly due to not realising the total amount of work that was needed, and also because progress has naturally slowed over the last few weeks.

And now I shall reveal a bit more as it is almost finished. Here’s the premise:

The game is set within a 50 story high-rise building. It has been taken over by a terrorist group.

The protagonist (ie – the guy what you control) appears at the bottom floor of the building. The leader of the terrorist group challenges you to reach him at the top of the building where he is holding a loved one of yours.

Each floor’s ventilation has been rigged so that after a certain amount of time, a poisonous gaseous substance will be deployed.
On each floor there are civilians to save, terrorists to avoid/kill and puzzles to solve. With each civilian saved, the leader increases the time you have until the gas deploys. Terrorists are like that, they love a game.

When you reach the final floor, there is a boss battle with the leader, and assuming you win the fight the protagonist and the hostage are reunited.

The gameplay will involve, finding keys, opening doors, activating switches, moving blocks, timers, cameras, stealth, extinguishing fires, shooting terrorists and so on.
The game has not got a name yet. Naming is not my forte. Please feel free to suggest some in the comments.

To prove that I haven’t made this all up, here’s some snapshots of the game.
(Warning – it may look a bit like Wasted Youth but I’m afraid it isn’t) 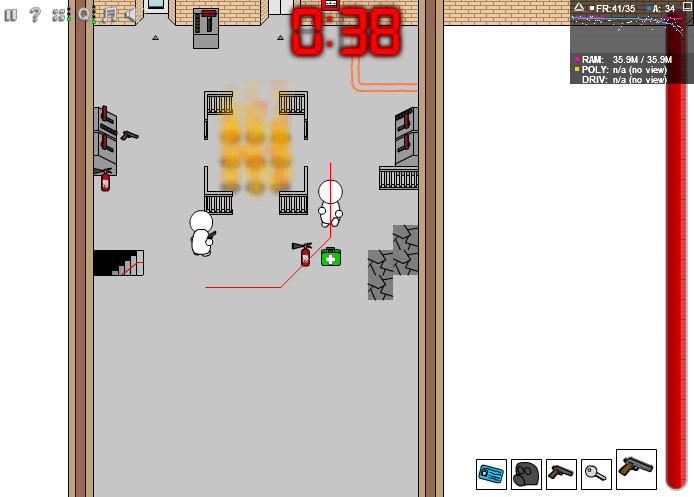 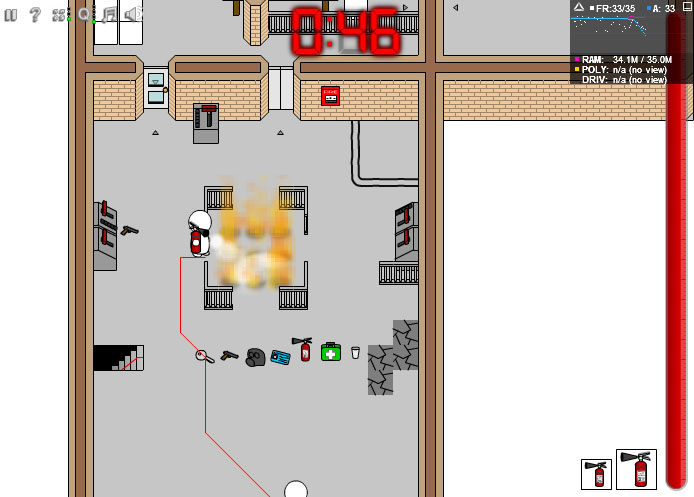 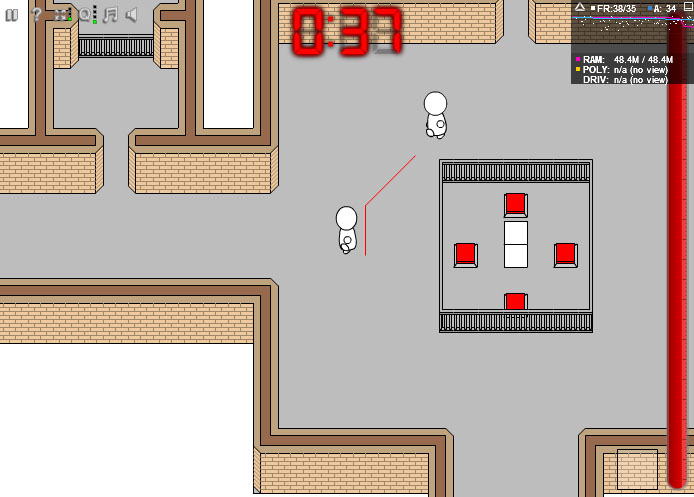 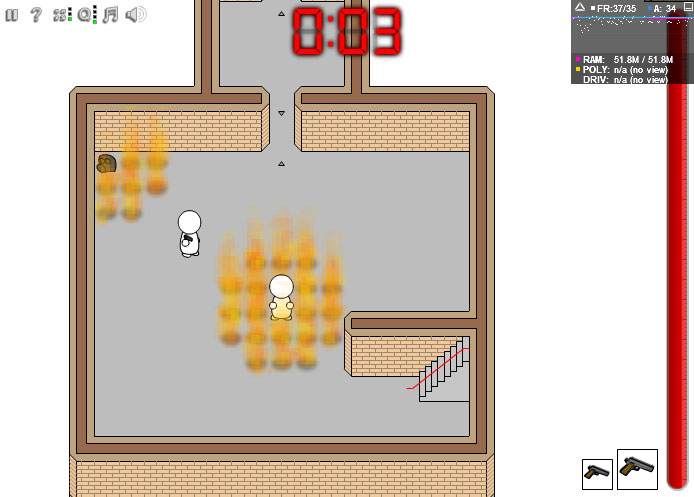 Yes I know, it looks far from completion. There’s a lot of graphics that are just placeholders (people, walls, floors, scenery… pretty much all of it)

Progress has slowed down a bit recently, and I have noticed myself losing concentration more, but I think it’s due to the relentless repetitive tasks I’ve been doing recently. I’ve had my head in code and nothing but for the last 2 weeks. Not to mention that staring at white screens with hundreds of lines of black code is a sure way of liquefying your brain if you don’t regularly take breaks.
I noticed the other day I was seeing blurry lines in my vision, and I briefly wondered if it was due to this task… but I don’t think eyes are capable of screen burn.

Anyway, I’m hoping that as soon as I go onto other things I’ll speed up a bit.

Still hoping if we can get a sponsor quickly enough we could have it out before the end of the year, which was one of the incentives of creating this game.

I’ll leave it at that. When it’s finished I’ll make some videos and let you bask in it’s glory.
I think it’s going to be quite fun once it’s playable :)
Fingers crossed that I haven’t created the gaming equivalent of a big steaming pile of dog tod
…I’m pretty sure it’s going to be a good game…

I don’t think I’ve got anything else to say… Apart from this weird thing.
The other day, me and my brother found a big pile of dead birds the other day in the wood. A pile of about 10 birds. Feathers everywhere.

We went back the next day and we could see disembodied duck heads and feet amongst the bodies.

I took some pictures with my phone, but it doesn’t feel right to publish them to the internet. And I doubt you give a shit anyway.
Maybe I’ll upload them on our Facebook page, for some of you sick sick bastards that like to see piles of dead birds, some of which are ducks.

Ugh, you guys really do disgust me sometimes. Get out of my face. Go away!!!

More pics (of the game not of dead birds you weirdo) and updates in the coming weeks for the as yet untitled game with gas and terrorists and stuff.

I’ve got it – “Game About Terrorists And Gas And Stuff”

Woah, it spells gas at the end. I think I’m onto something here…

Went back to the woods again today and found a new pile of dead birds. All of which were ducks. I counted five of them. Their necks had shredded and were pink with raw flesh. I saw 1 or 2 disembodied duck heads.
And next to the pile was a very neat block of fur, about 15cm in width height and thickness.
Also, I forgot to mention that on another occasion a few weeks ago I came across a rabbit foot. I instantly thought of Kyle MacLaughlin finding the human ear at the beginning of Blue Velvet.

I’m pretty sure these ducks are not wild, they have to be from a nearby farm. I should tell some authority but I don’t know who.

Seeing as I’ve got little else to report on, I’ll be updating you on these grizzly woodland murders in the near future.

Happy Halloween everybody. I hope this spooky tale doesn't give you nightmares...

*Strange man sitting in a highbacked armchair wearing a maroon coloured velvet robe laughs manically, while thunder rumbles and lightning flashes in the background (Just think Vincent Price in any film he did basically)*