It’s time for another update.

Since last time I’ve been very busy working on the game and for once I can look back at my post from 2 weeks ago and feel quite pleased with myself on the progress I’ve made.

Usually I find time goes very quickly when I’m deep into a project, but the 3D character model seems like something I did several weeks ago.

I hope this is an indication of something good.

You might notice I’m a day late on this post (every fortnight on a Sunday). I lost track of time during Sunday as I spent the entire day from morning until midnight crafting 3D models. It’s quite a nice state of mind to be in, concentrating so hard that hours fly by without notice. 3D design reminds me of arts and crafts from my youth. Measuring and cutting MD, moulding things out of clay, even painting. It’s very satisfying.

The vision I had for the game has changed somewhat since the last post. I was thinking of making the game a blend of 2D and 3D, a style that I quite enjoy in other games. However, I’ve since been playing around in 3D design and decided a fully 3D approach would be better suited.

I think I went over this in the last post, but I can’t quite stress what a big happened in my perception, and now it seems just the easiest and simpler option for me, despite many reasons why it arguably isn’t.

What I love about Flash is the ease of design. Maybe because I came to it when I was young and there was just enough squish left in my brain to soak it up.

What I was trying in Haxe before venturing into Unity felt very clunky and impractical. It just didn’t click into place like I hoped it would.

Fortunately now with Unity I can apply a very similar workflow and style that I developed during all my years working with Flash and Actionscript 2.

Another big change that I’m pondering is the whole perspective issue, scrapping the top down view (which I love) for something more convenient.

The problem is I’m now capable of creating more visually complex rooms and scenery, and the perspective hides an awful lot of detail. It doesn’t require explaining, but obviously a cube will display 3 faces at any angle… except for the angle I’ve chosen where only 2 faces are visible at any time. To state it practically, it’s seems a bit silly that you can only see 2 walls in a 4 walled room, and even worse, it’s really only the front wall you ever see.

Perhaps a slight angle would help, or maybe a control to rotate the perspective in 4 directions.

I’m currently designing the main building, here’s where I’ve got to so far.

Currently everything is untextured or solid colours so it’s very difficult to make out any details in the picture above. It doesn’t look very impressive I’ll admit.

Also, in truth that only took me a couple hours to do, it was just a matter of placing objects.

It’s quite interesting how I’ve done the walls, doors (and eventually windows).

I’ve applied the same restrictions of a 2D tile editor but in 3D. I’ve simply got 10 or so different types of wall and I’m just placing them in a grid like fashion like Lego pieces or Minecraft blocks.

I’m basically just copying the same system as The Sims - I’ve made it so I can select a whole bunch of wall pieces in the editor and apply a different design or color palette with a few clicks. It means I can create and edit a room almost as quickly as I could in a tile editor.

Counterintuitively, I find creating a wall style in 3D is a lot quicker than I can manage in 2D, so it works out even better.

I’ve also created a shell for the building (the exterior) which is only visible from outside, but I’ll save that for another time.

Following up on my weird little 3D guy form last week, I spent a little bit of time improving him before giving up:

I’ve decided that kind of high-poly-count semi-realistic style, designed and animated by a fledgling like myself just won’t work.

I want to retain the simplicity of the original 2D character designs, but in 3D. 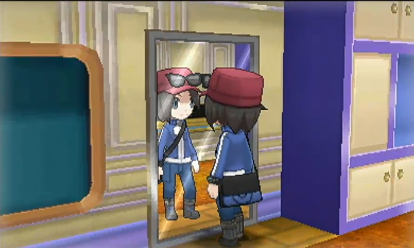 It’s not exactly what I’m aiming for but the characters in the latest Pokemon game is closer to the kind of thing I want, with the charm of a lower than usual polygon count. In other words, not the smooth faced, round buttocked freak thing I created last week.

The thing I’m genuinely afraid of though is creating by accident Grum from Tim and Eric Awesome Show.

The game will need put across a pretty serious tone at times and I don’t want to undermine it with stiff looking characters that resemble sentient mannequins.

If I can’t manage it I guess I can resort to using 2D just for the characters, but as I explained in the previous post, while creating a single character in 3D takes longer and is generally more complex, it makes it a whole lot simpler when it comes to animating a specific action, and there are a ton of little animations, I think there were 20 - 30 character animations in the original, what I ended up doing was restricting the animations that weren’t walking or running to a designated angle, so I wouldn’t have to create more than one for each side.

For instance, it required an animation when you watered the plant in your dorm room with a watering can, but I made it so if you were standing infront or behind the plant pot you walked to a specific spot where you were facing right, as I couldn’t be bothered to animate it 3 times.

I mentioned earlier on I spent all day Sunday creating 3D objects. That’s pretty much what I’ve been up to for the last 4 or 5 days. So far I’ve managed to create variations of walls, seating, plants, lockers, shelves, a toilet, sink, urinal, radiator, computer, TV, bed, and so on.

Just before writing this post I made some school gates 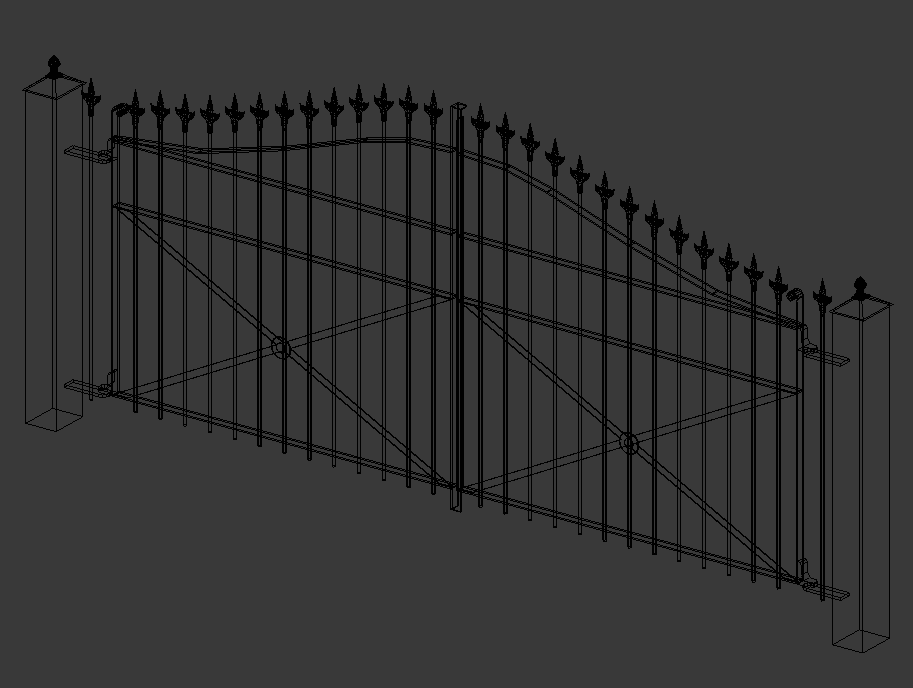 Again, none of it’s textured yet, and texturing often takes more time than designing the geometry, however I hope I can can get away with some lazy stuff, like if something’s wooden all I need is a seamless wood texture and I can wrap it up like a present.

As you can imagine, there’s a huge load of things that I need to design to fill up an empty set of buildings, but fortunately a lot of this shit just needs duplicating. It’s not like I’m designing a particularly diverse environment. It’s a school, it wouldn’t be very realistic to have that much variation from room to room.

However I would like to try and make the rooms a little more interesting this time, for instance the dormitory in the original was such a dull place to explore, being mainly just bedrooms.

Also consider the exterior environment will be completely explorable now, with lots of space between buildings that I need to fill.

Nobody’s mentioned it but you’ll notice I’ve stopped bleating on about Kickstarter and Patreon of late.

That’s still the plan but for now I’m keeping schtum. I talked about it like it was imminent but until I have something significant to show for I won’t be asking for your money.