I’m going to keep this update relatively short. It’s not that I haven’t gotten much done, it’s been a good couple weeks, but it feels like I’ve been doing ‘same-old same-old’ since the last post.

I’ve been working with Unity for a month now but I’m still only just getting the hang of it. There’s some fundamental concepts that I’m struggling with still, and it appears to be a lot less functional than I originally thought.

Annoyingly I’m finding some of the more technical stuff a lot harder to research. And the questions I’ve asked on discussion boards and the like go unnoticed and unanswered. It’s kind of frustrating, I’ve yet to find a really good source for information. It might be time to shell out a few quid for some physical reading material.

Despite the difficulties, I’m still happy with this new direction. It seems pretty definitive now that this is the right way forward, and I hope it makes the best possible game that I’m capable of.

Since last time I’ve still barely written any code or game logic of any kind, I’ve been in full-on artist-mode.

I’m going through a very similar process as to when I was creating Wasted Youth Part 1. It feels a bit like deja vu.

I spent something like 2-3 months just creating objects and rooms, although repetitive and mind-numbing it was kind of thrilling to see the world grow and become more detailed over time.

Similarly I created most of it in monochrome originally, as I am doing so currently in 3D.

It’s still a lot of fun and I feel I have a knack for making things . What I’m not terribly good at is scaling and a sense of spacial awareness. What I mean by that is I basically I made all the rooms about 1.5 times larger than they should be without realising, and even after reducing them significantly they still look a bit iffy.

I haven’t got much else to say so judge for yourself:

(Apologies for the lack of clarity in these pictures, most objects are still untextured so it's very difficult to interpret smaller objects. I assure you they won't look this crap in the final product. Also don't forget you can click the pics for a better view.) 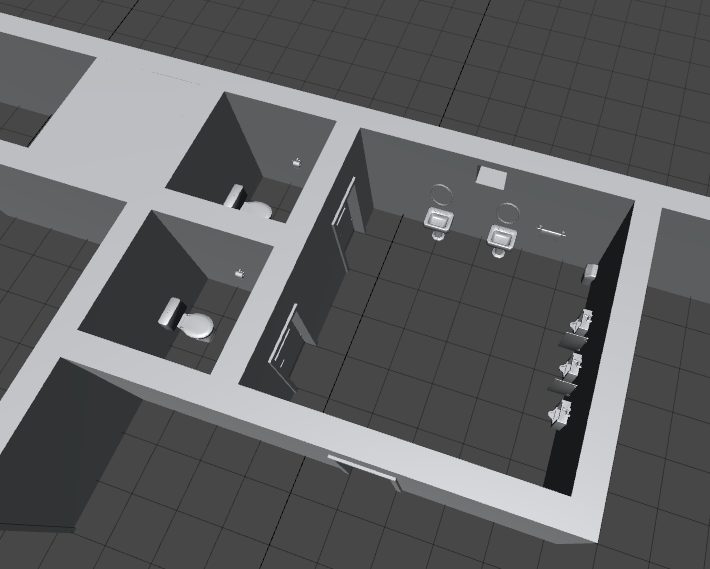 A restroom within a new building in the north west corner of the school grounds. 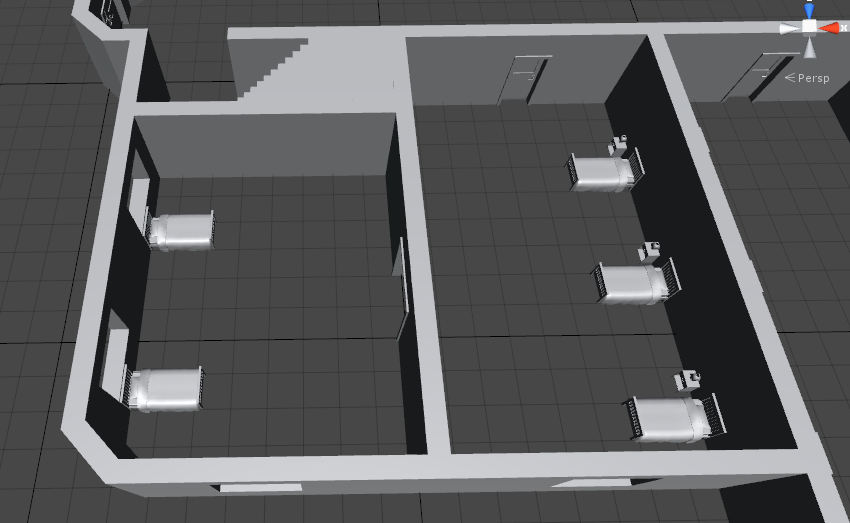 A very barebones representation of a bedroom in the dormitory. 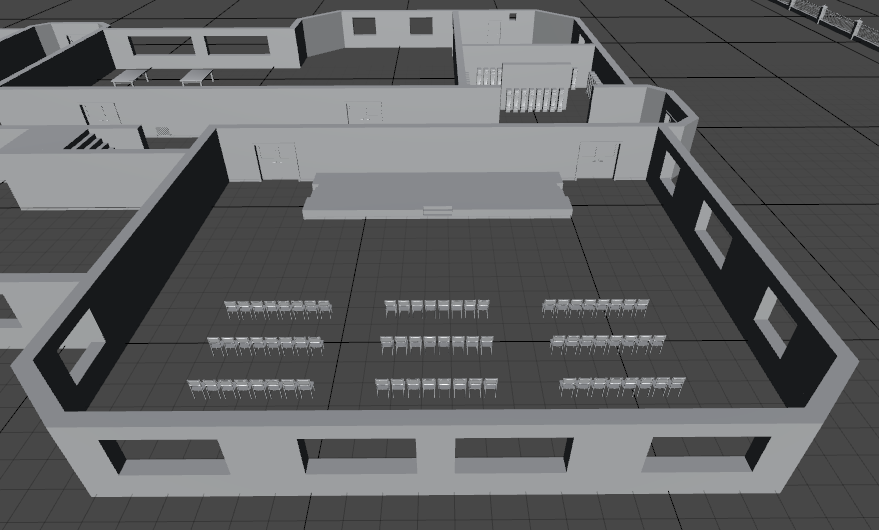 A very basic assembly hall. It looks pretty underseated, but if you count there's exactly 72 chairs. There's only 52 children. Which is kind of a problem...

A collection of trees. There will be a lot more greenery outside this time round. 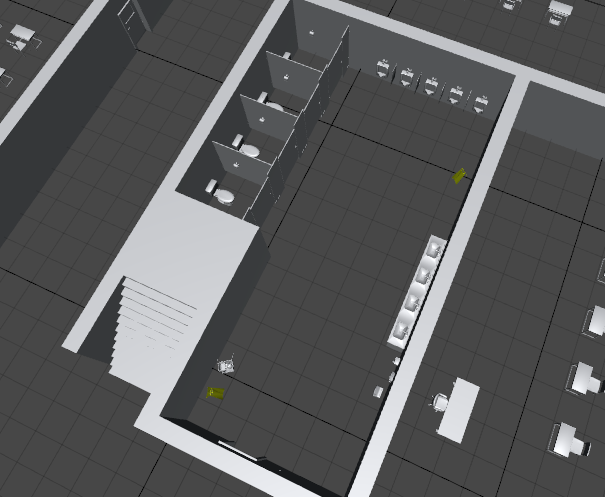 The new layout for the boys toilets in the main building. It's difficult to make out but in the top right are urinals and to the right are sinks, a hand dryer, a towel dispenser and a bin. Again, I'm confronted with the problem of perspective. With the old style angles the sinks, mirror, etc. would be totally obscured by wall. Still considering a solution... 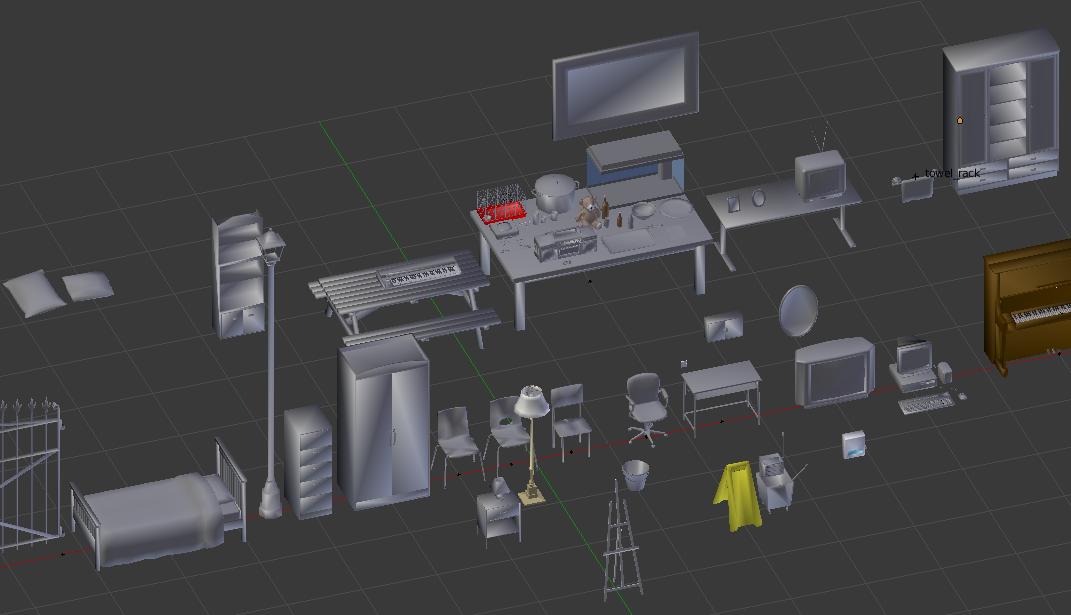 About 1/10 of the contents of a file I've helpfully named 'SHIT'. The shading on objects is a bit weird because I've got the quality settings fairly low for editing purposes. The lack of colour makes objects pretty hard to distinguish. 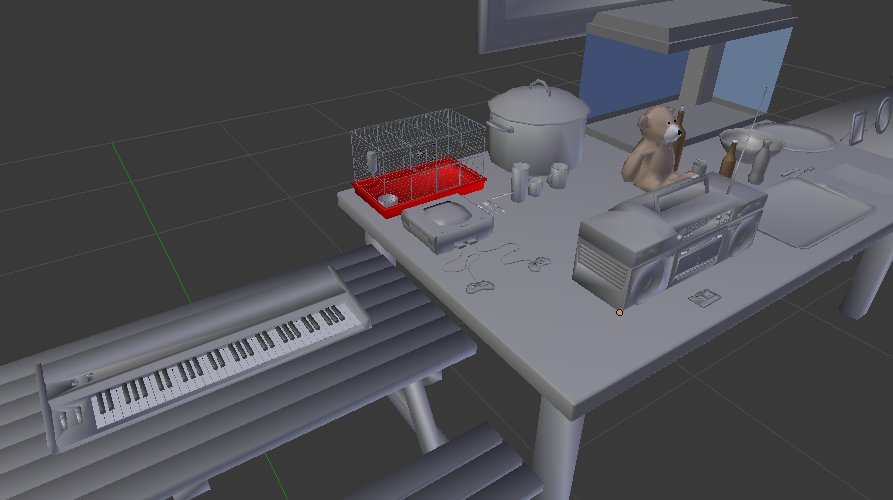 A closer look at some miscellanious objects on the table. Note Hammy's cage behind the Sega Saturn console. 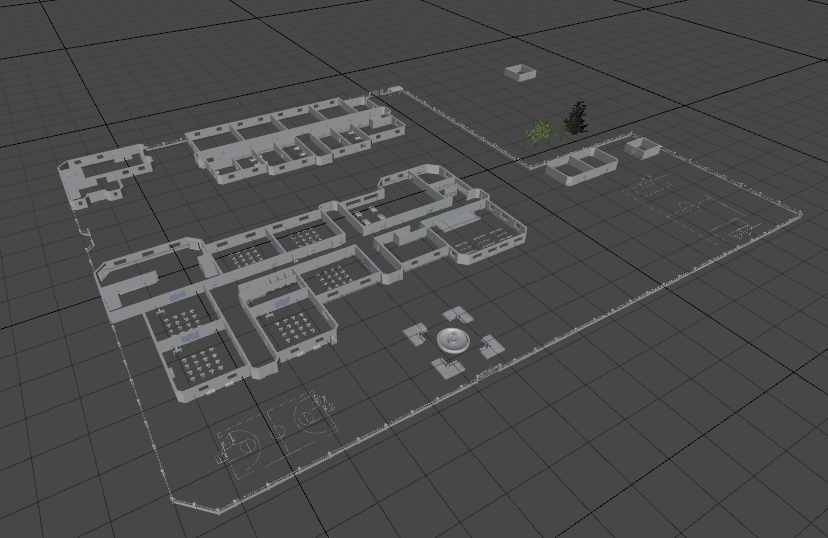 St Frost's Academy in all its glory. Well, not quite but it's getting there.

As you can see it’s still got a long way to go, but honestly it’s going a fair bit quicker than I expected.

The prospect of designing a fully explorable area of about 200m x 200m, several multi-storey buildings and around 50 rooms in 3D seemed at one point like an impossible feat, even though it was what I wanted I denied it as a possibility, but so far this gamble seems to be working out. There’s some pretty big unknowns I’ve yet to tackle (sorry to be vague) but I’m quite confident I can resolve them when I encounter them.

I hope those of you who were particularly insistent on more news and details in the past are satisfied with the more regular blogging recently. I’m kind of worried with this new regime that it’s spoilt the excitement for some of you.

Anyway it’s good for me, it provides a great motive to just get on and work so I have something to show for every 2 weeks, so for the foreseeable future I'll carry on updating the blog every 2 weeks or less.

Any sort of engagement from you is great so if you haven’t already, get in touch via the comments or Facebook (I don’t think anybody bothers with the Twitter) and spread the word of this blog to anybody who might be interested.

I doubt anyone cares or has noticed, but I’m a day late on the blog again.

I was going to write one last night but I was overcome by heat exhaustion or dehydration or summat like that. I got light headed and couldn't get up without feeling like the room was spinning, it was pretty weird.

Until next time, bye.