Are you bored of this yet?

I’ve really felt like putting this off until next week, but I’m doing it anyway just for you lot, you lovely people (aww).

I don’t think the last 2 weeks haven’t been very productive.

It’s not like I've spent less time on it than usual, it’s just I haven’t got much to show for. If I look at the snapshot I took of the project from 2 weeks ago it looks about the same.

I’ve mainly been fiddling about in Unity and coding in C#, creating bits and bobs, creating my own editing tools and utilities, some of which have little to no purpose except to teach me.

That’s how I’ve spent the bulk of my time, it doesn't amount to much.
I’ve been wearing in my new shoes basically. I’m learning quite a lot about Unity and 3D in general, so it’s not time wasted (nopunintended) but, what can I say - it's been a bit slow.

Don’t fret though! I haven’t come here empty handed, in a last minute effort I baked some delicious cakes (gifs).

Anyway, it’s not all bollocks, I’ve designed many more 3D models and gone back and created separate collisions meshes for each model. I may have gone overboard, I’ve even given defined collision properties for cutlery.

It’s brought to question the idea of employing simulated physics for every object. The idea at first was just to make each collidable object defined as a box, but as I went along I began making them more complex and true to form. At the time I thought it could allow for some interesting new mission ideas involving projectiles. I’m not sure what I was thinking really, but I’m sure this will allow for some interesting new ideas.

Just as an example, here’s a model I made… sort of. For the more substantial models I start with someone else's model which I usually get from 3dwarehouse.sketchup.com. These aren’t models appropriate for games, so I put them to 1 side and use it as a guide for creating my own. So I spent a good couple hours just creating this: 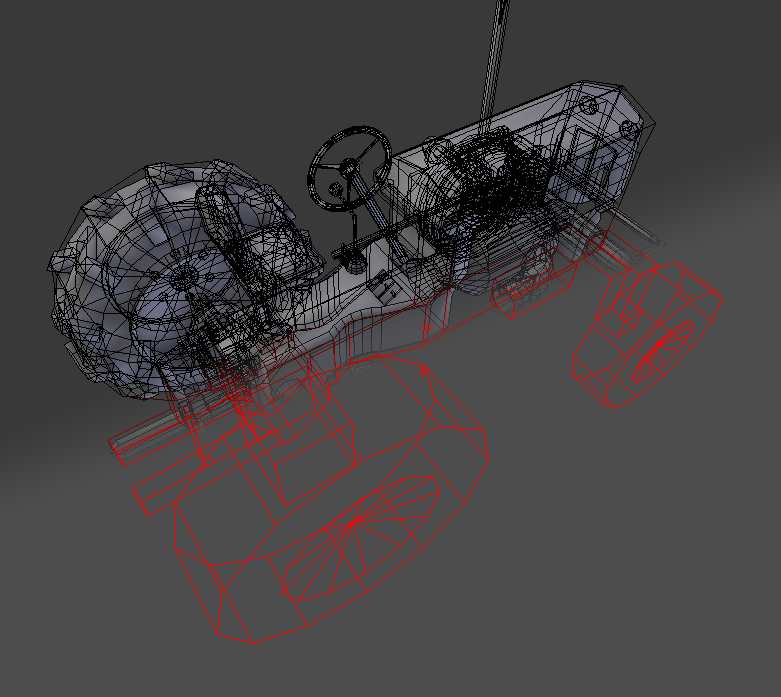 The red mesh is the body that will react to collisions. This is necessary, I can’t use the visible mesh for collision as it’s far too complex. All we need is so the player isn’t able to walk through the mesh, for which a box would have sufficed, however I’ve gone a step further just incase I have any bright ideas. Maybe even make it driveable.

And just for the hell of it, here’s a physics test with a load of keyboards:

If you’ve read the last few posts I’ve been having trouble deciding whether to emulate the camera style in Wasted Youth, Part 1 or try something new.

For a while I was pretty sure I’d use a camera with an isometric/orthogonal setting (ie, objects far away don’t appear any smaller), but I think I’ve made up my mind to go with something a bit more standard.

Here’s some crappy diagrams I made in Paint:

To fix the problem of that annoying back facing wall it'll go invisible when you get near it.

I’ve tried out some different camera settings to check out how this looks and I’m quite happy with it. 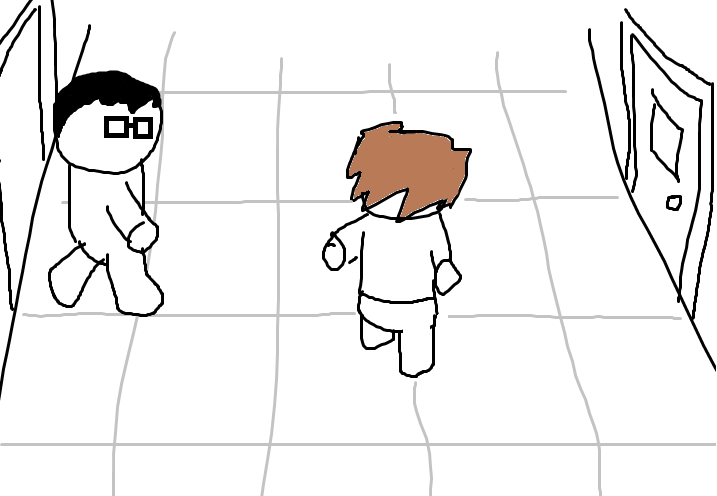 It’s a bit sad to give up on the old-school RPG style perspective, but this just seems a lot more practical, and I dunno, it looks friendlier. I like it.

I think I wrote in a post 2 months stating that 2 weeks from then I’d soon have some kind of working prototype with a controllable character and rooms (mind you that was before I decided to start again with Unity), but finally I think I might actually get to work on this, and hopefully have something ready to show next week, maybe a video.

It sounds weird but I’ve spent a lot of mental energy recently trying to decide how to do the floors. This shouldn’t be a difficult question for most developers, but it’s been driving me nuts. I’m pretty sure I’ve worked out a system for interiors, but I’m still not sure how I’ll do outside.

Thanks for the kind comments and enthusiasm on the last post by the way, keep it up!

As it’s become a trend, from now the official day I'll post updates will be Mondays.