When you can spend ten minutes on the main menu and still be entertained, you know you’re playing a good game.

Cyclomaniacs 2 is the long-awaited sequel to the popular original and as far as content goes, it certainly delivers.

There’s a story this time round – most of the characters from the first game have gone evil (I didn’t pay attention to what their plans were, sorry) and you have to stop them by winning loads of cycle races.

The game works in much the same way as those old BMX balancing games that you used to see everywhere in the early days of flash gaming. Controls are on the arrow keys – up to go, down to stop, left and right to align your bike.

Pressing left or right will make you do wheelies, or rolls if you’re in mid-air. These build up your trick meter and if you fill this up you gain a boost bar, which triggers automatically and increases your speed. Keep performing tricks to fill your trick meter again and you can get a combo boost, all the way up to eleven (insert obligatory Spinal Tap joke here). 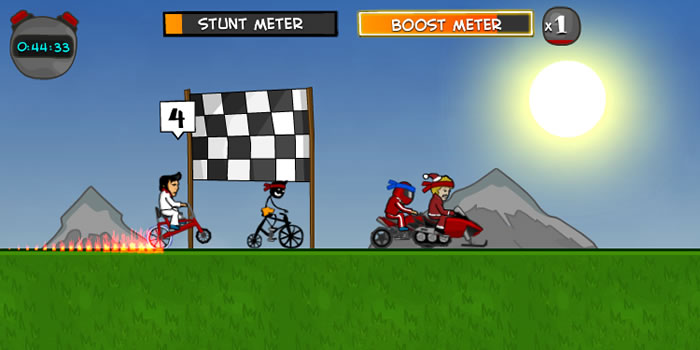 Filling your boost bar will make you go so fast your back wheel catches fire, which voids your warranty.

There are several levels and most of them have a side quest for you to complete as well – this usually involves performing a certain trick a set number of times or picking up a set number of collectibles on your way to the finish line.

Many of the levels also have a bonus stage that can only be completed with one character. These are a little more diverse. They can involve dodging meteors as you head to the finish line, having fun on a half pipe, or racing on a special variant of the normal level.

There’s plenty to keep you busy for hours and it’s laid out in a very player-friendly format. Any uncompleted challenges are clearly indicated on the map, and character-specific challenges don’t require you to select the character from the main menu beforehand.

And talking about the main menu… This is your headquarters. Your boss is Elvis Presley.

The main menu is filled with goodies for you to find and keeps track of your progress so you can find out how well you’re doing at a glance.

From here you can access the achievements trophy case, the character bank, the upgrade laboratory and the game map. On top of that, everything else is clickable and usually offers a minigame for you to try. Complete these and you can unlock even more characters to play with.

The first game was good in offering a lot of variety in its characters and the sequel has even more on offer. Given the simplicity of the controls, it’s surprising how many of them play differently. Some are better at wheelies, others at airborne flips and others are straight racers. You’ll probably base your decision on who your favourite character is based on how they play. 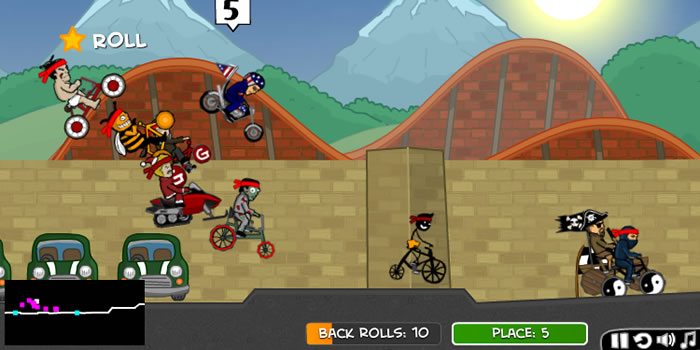 And there are plenty to choose from.

The only issues I have with the game are as follows:

It doesn’t feel as fresh as the first one. This is probably due to the fact it’s a sequel (says Captain Obvious) and I may be remembering the prequel in an unfair light, but the levels didn’t feel quite so well designed this time round.

My other problem is the difficulty. I don’t remember shouting at the first game. Some of the later levels seem unfairly hard, even when you’ve fully upgraded your rider.

Some notable examples include the underground level, where you have to do loop-the-loops perfectly otherwise you may as well restart, and the final level, where the only way to win is through some lucky jumping. There are also a couple of levels with ramps that won’t let you ride up them if you don’t approach them with a wheelie, which seems like sloppy design to me. 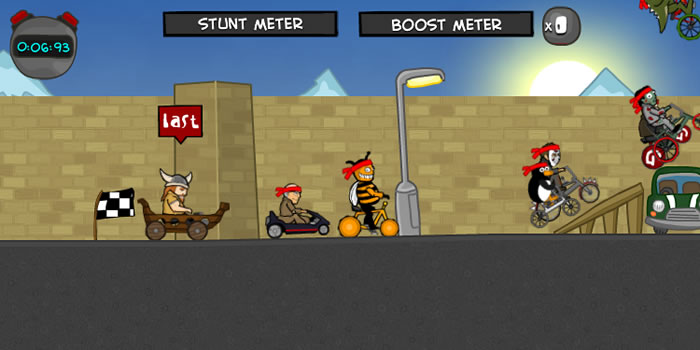 When you hit the last levels, keep your rage face on standby.

But these issues only detract slightly from the overall experience. I never came close to ragequitting and I had fun throughout – just don’t expect to finish it in one sitting.

Put the pedal down: CycloManiacs 2