Elements Of Arkandia is an essentially flawed puzzle/RPG hybrid that still manages to be great fun despite its faults.

It’s the latest game from Undefined, who created the Protector and My Pet Protector series.

The Protector series has proved popular but has never held much appeal to me. Admittedly I’ve never played it enough to get anything more than a general first impression of it, but it just seems like a basic tower defence game to me.

I have played both the My Pet Protector games and completed them, and enjoyed them – although they’re both missing a certain something. Both games have a lot of stats to level up but this can quickly turn into grinding. Not a bad thing in itself, but there needs to be a pay-off – the games lack a satisfying ending. There’s no sense of accomplishment.

Undefined’s game Arkandian Crusade (there’s only been one so far so I can’t call it a series) was his best so far. It was incredibly similar to My Pet Protector but had a few important changes.

There was a story and a better approach to the many levels. There was less grinding for the sake of it. There were other minor changes but they all added up to make the game more fun.

Elements Of Arkandia has the same graphics, production values and sense of humour as Undefined’s previous games but there is one major difference.

Battle is no longer carried out by hammering an attack button and using limited spells and potions. Instead, you fight by playing a game of match three. 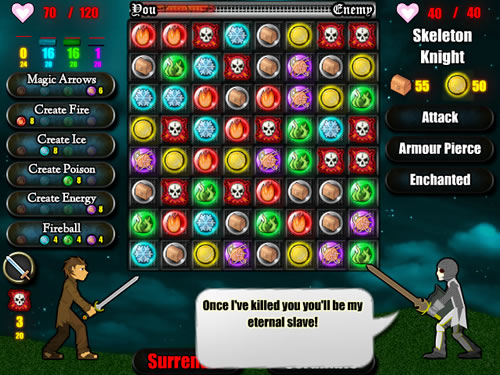 Who knew Bejewelled could be so deadly?

Every time you match three gems of the same type, you gain resources to help you in your fight.

The most common type is mana, in the four flavours of fire, ice, poison and energy. I’ll come back to the spell system later.

You can also gain rage, used for making physical attacks, coins and treasure.

But it wouldn’t be a fight if your many enemies couldn’t strike back. At the top of the screen there is a red bar that slides to the right with every match you make. After two matches, the enemy gets to attack or cast a spell – this can heal them, restrict your combat options, damage you based on how much mana you have or set a trap – match any of a certain type of gem while this status is active, and you will get hurt.

You can prevent that red bar from advancing by matching four or five of a kind, which will also heal you a little bit. If you also kill an enemy right before it’s their go, the next enemy will miss their turn. This can be an important tactic, as all the stages have at least three enemies to get through. 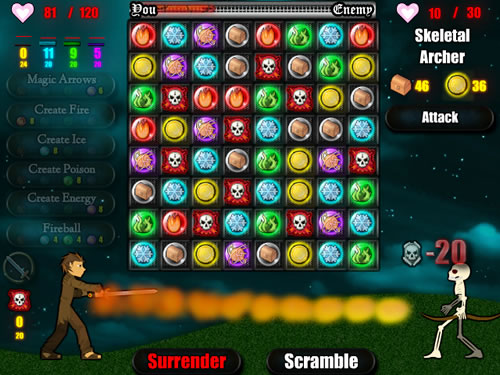 If you’re really lucky, your enemy won’t even get a hit in.

You can unlock bonus items and spells by matching up to 100 treasure gems in a single stage.

These spells are your main form of attack. You can only have a certain number of spells available to you in each fight and as you unlock more, you can start building a deck and create a winning set of tactics.

Each spell uses mana and most need more than one type. You’ll need to balance your spell set so you’re not relying too much on just one type of mana.

The spells offer several variants on four themes – healing, causing damage, boosting resources or wiping gems off the board.

If you’re a decent player then most of the levels will be a breeze – at least until you get to theUnholyTemple. This level is a bitch to defeat and it is here that your victory will totally depend on the spells you decide to use.

After you’ve beaten it, the game is basically over because you gain a set of spells that let you basically wipe out a quarter of the board every go. 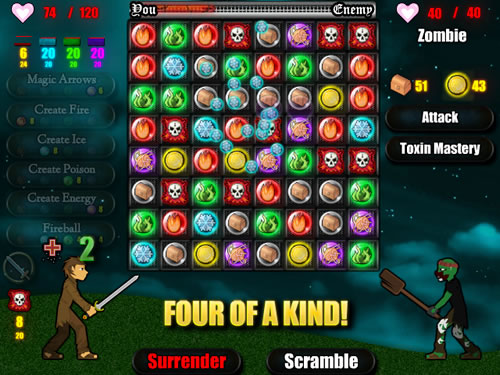 It may seem easy now but just wait for that difficulty spike.

But the reason why Elements Of Arkandia is so much better than any of Undefined’s other games is that there is no grinding. The only things you really need are spells, and those are unlocked just by beating levels.

Of course, there is much more to this game than combat and this is where the major flaw comes in.

The story of the game sees your father leaving you to look after his shop while he’s gone – unfortunately, he has accrued a massive amount of debt that you have to pay off. This debt grows bigger every day due to interest charges by the bank.

Luckily you earn money and loot from winning battles. As well as improving your skills and statistics, the equipment you gain can be put up for sale in a shop. When you open your shop for business (during which a day passes, accruing more interest), customers will look at your wares and decide whether they want to buy. This means you have a chance of selling everything – or nothing.

The game gives you hints as to what type of items may sell well on a particular day and you start off with limited shelf space, so there are some tactics involved in running your shop. 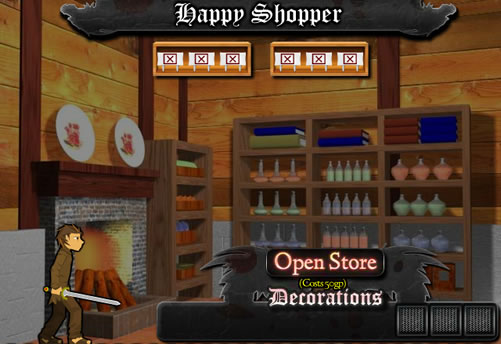 Here’s a hint – the weapon you start with will NEVER SELL. I had it on sale for most of the game and it never went.

The main aim of the game, outside of beating all the levels, is to earn enough money to cancel out your debt. You can choose to make loan repayments at any time.

You can also put your money to more practical uses, such as improving your shop, buying larger mana pools and increasing the amount of money you get for every match.

The game works well and the two elements of play combine nicely. You can only gain equipment by fighting and the money you earn helps to make fighting easier.

So what is this flaw that I spoke about at the start of the review? Well, it’s a minor niggle but one that might ruin the game for some people.

There’s no conclusion, no pay-off for completing the game. There is no ending screen after you beat the levels and eliminating your debt just earns you a couple of powerful items that aren’t worth the money.

The problem is that you can ignore the debt mechanic completely without any penalty, which kind of makes it meaningless. I left it until I beat the game before cancelling my debt, by which point I was given a set of armour that basically made me invincible.

Being given two less powerful items as a reward was not the ending I was hoping for, and I walked away from the game thinking: “Oh well.”

But even if I had known about this issue in advance, it wouldn’t have stopped me from loving it. I’m a sucker for Bejewelled-type games and the added RPG elements elevate it from good to great.

Here’s hoping there’s a sequel that’ll be even better. 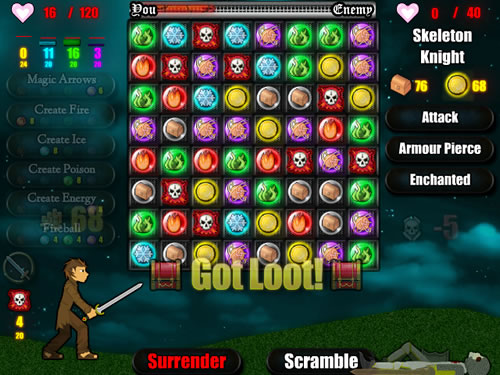 Here’s a cheat: when you kill an enemy, you sometimes get the chance to launch another physical attack. Do so, and you get double loot!

Match them up: Elements of Arkandia