A while ago a game came out called Dead Frontier – it played in the same way as the old choose-your-own adventure books and was pretty decent.

It was set in a zombie apocalypse and you had to find the best way to get your character to safety, hopefully saving your wife on the way. All the text was voice acted (and there was a lot of text – I can appreciate the effort put into that, even if I preferred to just read it) and each scene had a photograph depicting the scene.

Shameless plug alert – the game helped inspire GP Studios to create Mutant Uprising, a choose-your-own-adventure game that also happened to be the most childish thing I’ve ever written. It’s fun (and the sequel is coming in a few months, after Wasted Youth Part 2).

It also inspired Hyptosis to create The Sagittarian. 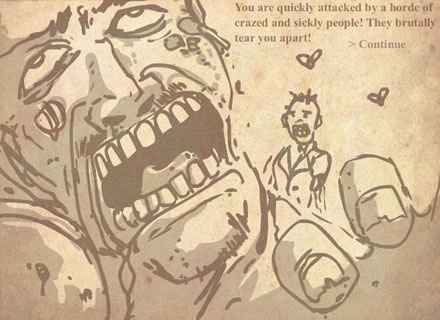 And this one has pretty graphics. Well, graphics at least.

The Sagittarian series has proved incredibly popular on the sites it’s appeared on and on the surface of it I can understand why. The music sets a nice atmosphere, the graphics give it a unique character and there is a sense of humour in there somewhere.

But there are just so. Many. Problems.

The entire point of this type of game is to give the player lots of choices that (at least most of the time) lead to logical consequences.

The first game starts off very well, until you reach the halfway point. Here you are given a choice of what city you want to head to. If you choose the wrong city, you’re dead – but there is no indication as to which is the right one. Even worse, the wrong city has an entire storyline with a few different choices along the way, giving you the impression you can actually win by going that way.

Creating dead ends in a game like this is unprofessional, frustrating and lazy – and he does it in episode three as well.

If you choose the correct city, there is then a sequence of about 10-15 screens where there are no choices to make – so you get a choose-your-own-adventure game with no choice. Slow handclap.

And the ending – you have to choose one of four places to make your base. Making the wrong choice here will kill you, just because the writer says so. It would be perfectly acceptable to make these options create a dilemma you have to survive, but it’s not good writing to just say “here are four options, now take a wild guess”.

Hyptosis’ worst excesses come to the fore in the third part – you can play through something like 40 screens and only have to make four choices. That’s not a game.

Anyway, it sucks and is also pretentious. So what makes a good adventure game? 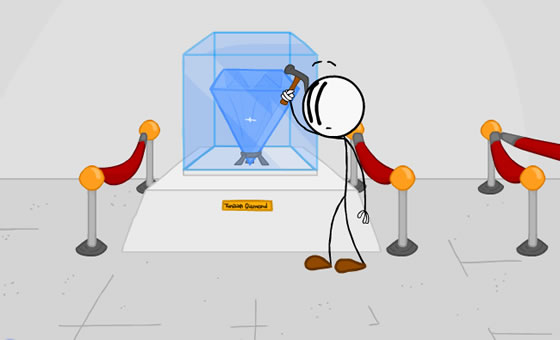 Stealing The Diamond is a continuation of a series that started with the flash film Breaking The Bank and the game Escaping The Prison.

You play as an amusingly inept crook who happens to see one of those conveniently timed newscasts that help to inform the plot – a museum has a nice shiny diamond and you want it.

The graphics are basic stickmen but are fully animated and are detailed enough to express a lot of character, adding to the humour. This has the effect of making the game into an interactive cartoon.

It’s up to you to decide how you’re going to break in and there are three endings to find. Will you sneak in, launch a full-frontal assault or take the third option of being completely epic?

Each crossroads normally gives you at least three options on how to proceed – the guy has so many gadgets with him that he puts most super spies to shame, even though they usually fail on him (with hilarious consequences, no less).

It does make the mortal sin of the “winning” option being completely random most times – but here, failing is kind of the point. Even when you choose the correct option, there is a choice to go back a step and click on the other options so you can see what happens to our hapless hero. 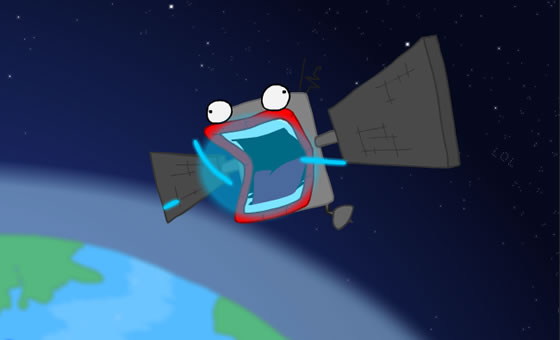 Whoops. Oh well, that was fun. Let’s do it again!

There’s even an achievement for seeing all the ways the guy can fail.

The game is littered with references to other games and memes – along the way you can expect to see shout-outs to Portal, Pokemon, Minecraft and more. Yes, they’re all predictable targets but the jokes are amusing.

There’s nothing that this game is really lacking – it’s funny, well presented, the options are clearly defined and it’s just long enough. It won’t get old and you won’t feel short-changed.

It seems that there’ll be a sequel at some point as well.

In all, it’s an object lesson in how to make a fun game. Developers should take note – this is how you do it. 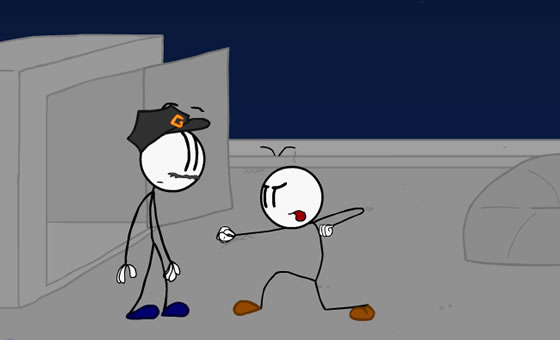 No zombies or mutants to be seen: Stealing the Diamond