You know, despite the fact I’m involved in making flash games I never really wonder much about other developers. When I’m playing a game, it never really crosses my mind to think about what sort of person made it.

The only reason I bring this up is because I was surprised to find out this game was made by a woman. That’s quite a sexist reaction, I’ll admit, but it’s one inspired by the image of a stereotypical gamer that’s promoted by the media – a male, white, English-speaking basement dweller in their twenties.

Of course, deep down I know that stereotype isn’t true (I’m in my thirties now) but it’s an interesting thing to keep in mind. There are people of all nationalities, ages and genders creating flash games and the best games are often the ones where people have imprinted their sense of humour and sensibilities into it (by the way, have you played Wasted Youth yet?).

This game is a good example. There’s a nice sense of humour running through it, with several snail friends to speak to as you make your way to the end.

There’s no prejudice in this game. There are snails of every colour imaginable.

The gameplay itself is a platformer in a Metroidvania style – perhaps it should have been called Casnailvania. For anyone unfamiliar with the concept, it basically involves a platforming maze where you can find new weapons and abilities that allow you to go back and overcome previously impassable obstacles.

The key test any game of this type needs to overcome is whether it’s fun enough to make up for all the backtracking you’ll be doing, and fortunately the answer is yes.

The controls do feel a little imprecise at times and squeezing into small gaps can be momentarily annoying, but there are plenty of checkpoints and the learning curve is set right.

The game is actually pretty difficult, which surprised me. The simple graphics and primary colours hide a challenge that will keep you going for about an hour, longer if you want to get 100 per cent completion. 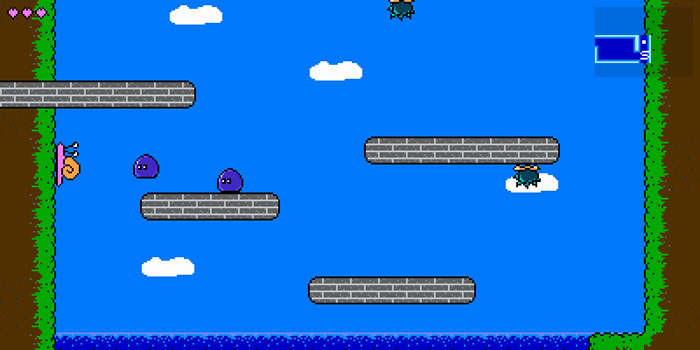 He’s not just a pretty snail, he has depth too.

The game’s name, Snailiad, was inspired by the Iliad. The story… has absolutely nothing to do with the Iliad. If you were expecting an epic tale of war, you’re going to be disappointed.

The story casts you as Snaily Snail, who is on a quest to stop the Sun Snail who has gone evil and become the super-powerful Moon Snail (why is the Moon character always the evil one? The Sun gives you cancer, for God’s sake). 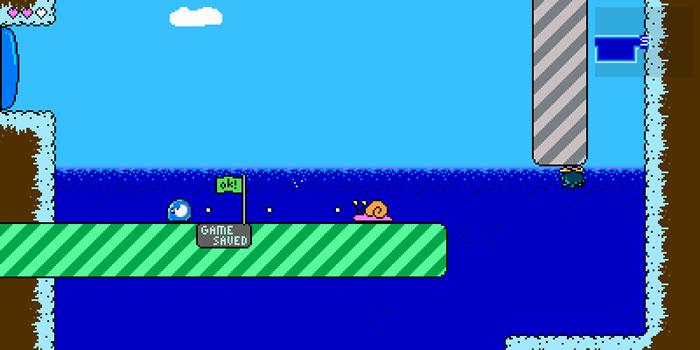 You’ll need all your platforming skills and all the power-ups you can get to beat him – there are several bosses to face on your quest and he is by far the toughest.

Items include heart containers for extra HP, various weapons (each of which renders the previous ones irrelevant) and helix shells, which you’ll need to collect to get the best ending.

Luckily, being a snail, Snaily Snail can walk up walls and on ceilings. This makes investigation a lot easier but it’s not the gamebreaker you’d imagine it to be. The entire game has been designed with this dynamic in mind. You’ll also be using your weapons to bust open secret walls and crawling around to find secret passages.

Once you’ve finished the game, there’s a super hard boss rush mode to complete (which I did first time, HA!). 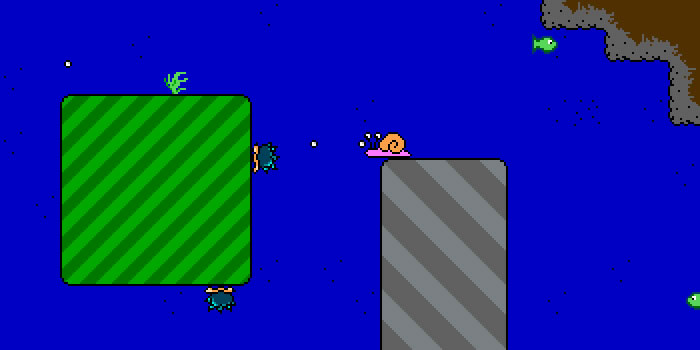 He’s a bit of a violent bastard, as far as snails go. He can also jump. Seeing as no other snails can do that, I think that makes him the chosen one.

So if you’re looking for platforming fun and you love snails, this game is the one for you. Heck, even if you don’t like snails you’ll probably have a blast.

Just to finish off, I got in touch with the game’s creator Auriplane and asked some deeply insightful questions into the processes of making the game and what inspired her to create it.

Q: Soooo… why are snails so great?

A: I don’t know, I just think they’re cute. I see them outside sometimes, crawling around slowly, nomming on some grass.

Thank you for your time. Here, have a snail.

Please do not copy this review without crediting the writer and this website.