The first thing I have to do with this game is take issue with its name. The little blobs you play with aren’t sticky in the least, they slip and slide all over the place. Sure, blobs of the same colour will stick together but they’ll fall apart just as easily. I guess the name Gooey must have been taken already.

Well, I’ve just digressed before even beginning. On to the game!

I’ll start with the first game in the series, Gluey, because although both games are incredibly similar they have a fundamental difference.

In Gluey, your aim is to eliminate the blobs filling up the screen by clicking groups of more than two. 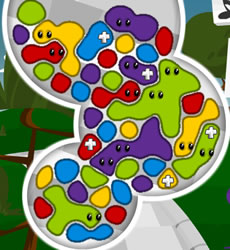 You see those blobs with eyes?
They’ll be dead soon.

The game indicates which blobs can be destroyed by making them grow eyes when two or more blobs combine. It’s kind of horrible when you think about it: the second they gain sentience, they get murdered. Good job the game is so much fun (and hey, the blobs on the title screen are happy and smiling so they probably enjoy it).

Destroying larger blobs will give you more points, which is key to the gameplay. You have a set points target on each level and a limited number of blobs. It’s up to you to carefully click the largest blobs, or take out some smaller blobs to make other blobs fall down and combine to create better scoring opportunities.

Some blobs have power-ups stuck inside them. These are geared towards improving your chance to score – some will cause new blobs to fall into the playing area, while some will create new blobs on the playing field.

If you manage to completely clear the level, you’ll get a bonus that will more or less guarantee your victory.

There’s not much more to say – it’s simply an innovative take on a game you’ll have seen hundreds of times before. There are thousands of group matching games out there, but there are few that involve physics and even fewer that feature blobs with eyes on them. 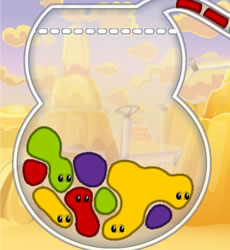 Is it just me, or do the blobs look
cuter this time?

Gluey 2 takes the same basic blob-clicking formula but gives it a twist.

Whereas the last game required you to create as many blobs as possible to get a higher score, the sequel requires you to get rid of blobs as efficiently as possible and the score is only incidental.

The aim of Gluey 2 is to prevent the blobs from overflowing off the top of the screen and survive until you have destroyed a certain number of them.

So this time round, the game plays as a kind of gloopy Tetris (although with far less precision – leave a gap, and the blobs will slide down to fill it. 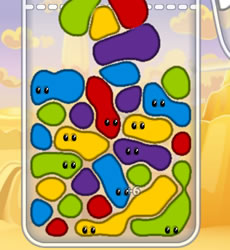 The best decision game creator Fizzgear made was to make it so you don’t instantly fail if the blobs do overflow from the playing grid. Instead, if you go into the danger zone then a countdown starts and you have a few seconds to save yourself. You can’t cheat by clicking like mad though – if you destroy the required number of blobs but you’re still in the danger zone, the level won’t end until you’re safe.

Strangely, the fact that you can die at any time makes this game less frustrating than the first. Gluey was good fun for the most part but you more or less had to complete a level before discovering whether you’d beaten it or not. In the sequel, it’s clear at all times whether you’re in trouble or not.

The power-ups in the sequel reflect the change in gameplay – instead of items that create blobs, you get things that destroy them, like bombs or “wipe-outs” that eliminate every blob of a certain colour. There are also some cool power-ups that mess with gravity. 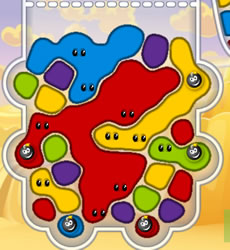 See those bombs? Click them
to incinerate nearby blobs.

The one power-up that carries over are the “lock” blobs. These guys defy gravity and prevent you from reaching the lower sections of a level until you destroy them.

They also come into great effect in some of the sequel’s harder levels. In these, there is a toxic pool at the bottom of the stage that gives an instant game over if any blobs touch it. This means you must leave the lock blobs alive at all costs – which can be tricky if there is a mass of other blobs attached to it.

Both games are worthy of your attention because of the different types of gameplay they offer. The only problem they both have is that there aren’t quite enough levels and they leave you wanting more.