Warp. Not exactly the most imaginative title in the world for what’s actually a nice little game.

To me, the title summons visions of some sort of Portal knock-off. That description is a bit of a stretch but there is one similarity.

The edges of each stage are linked to one another. Walk off the left side and you’ll reappear on the right. Fall off the bottom of the screen and you’ll appear at the top.

This key gameplay mechanic is used to make some fun – if simple – puzzles.

It’s the only way to travel.

Each of the levels has the simple goal of guiding your little guy to the exit. The first three levels act as basic training before things gets slightly more complex. You’ll soon be timing your jumps off the edge of the screen to land on platforms on the other side of the level.

There are other obstacles to overcome, of course. The platform gaming staple of spikes makes an appearance – some players have complained that they can be difficult to see because both the platforms and the background scenery are black, as are the spikes, though I never had a problem.

There are also orbs that you have to activate to unlock the exit – hooray for backtracking!

And many levels have both spikes and orbs in them! Can you handle the excitement?

The jumps start getting a little trickier after the first ten levels, as well as the appearance of enemies that you can kill by jumping on their heads. As you control a black guy and all your enemies are white, this could be seen as a strike against white supremacy and centuries of oppression. It’s not, but hey.

One touch from these guys will kill you instantly and some later enemies wear spikes as a hat, meaning you can’t squish them. They’re also impervious to damage from spikes themselves.

Spikes and whites working together to keep the black man down… sorry, I’ll stop doing that now. Please don’t jump on my head.

Luckily there are power-ups to help you along the way. Each one gives you a different-coloured haze around your body and only one can be active at a time.

Green allows you to jump higher and blue allows you to kill whiteys with a single touch. Yellow is trickier – if you kill an enemy while it’s activated, any fragile platforms nearby will disintegrate and allow you to progress. This power-up has a pretty low range, so it allows for some puzzles with pixel-perfect murdering. 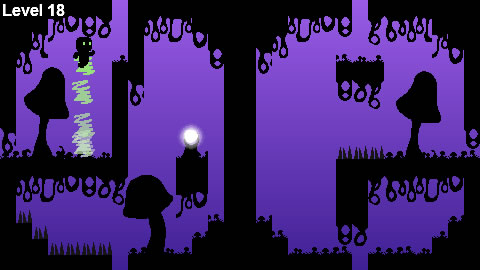 Warp Game left me with mixed reactions. It’s a great little game with some interesting ideas that could combine to create some really difficult puzzles.

Unfortunately, only levels 28 and 29 deliver on that promise and then the game’s over. It’s a shame.

There is one redeeming factor, however. There’s a level editor that’s easy to use and several people have already created some nice challenges for you to play through after beating the main game.

As you’d expect though, there are a few bastard-hard missions in there too. If you get frustrated, don’t worry – just make a level that’s even eviller.

Click the link to warp to this game: Warp