Perhaps my skills were getting weaker.

That’s what I thought when I last played Last Stand.

I can normally make short work of the sequel, Last Stand 2, but the original can really kick your ass if you’re not careful.

The first game was pretty cool, but as I said before, it can kick your ass without warning.

You play a survivor of a zombie outbreak and the only thing between you and death is a flimsy barricade and an infinite supply of bullets. The zombies come thick and fast, increasing in number rapidly over the 20 days you have to survive before you get rescued. By the last few levels, you’re basically facing a zombie tsunami. 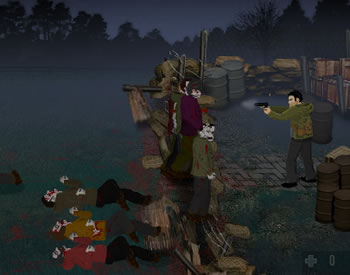 And if your barricade crumbles, you’re as good as nom.

But luckily for you, the zombies don’t attack in daylight. They obviously have some vampire genes in them. Either that or they don’t tan well.

You get 12 hours of daylight, and your survival depends on how well you invest those hours.

You get three options: repair your barricade, search for weapons, or search for survivors.

Repairing your barricade is important to prevent yourself from becoming lunch, but you’re also going to need better weapons pretty quick. You can tell how close you are to finding new bang bangs by looking at a weapon hunt progress bar.

For the later levels, you’re going to need as many survivors by your side as possible.

Unfortunately, they can get killed while out searching for stuff so you may need to seek out new friends.

I don’t know if it’s down to luck or me just plain sucking, but you can get through some levels with barely a scratch and then the next stage can see those zombies tear through your barricade in no time flat.

It’s a good job that your barricade doesn’t mean instant death, as in many other defence games. Here, it’s just a near certainty.

Your fellow survivors flee like the cowards they are while you stand there still shooting, like a hero.

It makes for some tense situations when the barricade falls just as the sun is coming up. The last few zombies slowly close in on you as you desperately try to pick them off before they make you into breakfast. 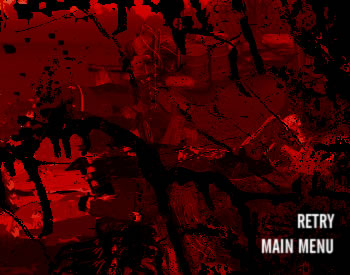 As for the control system, it’s pretty good. You’re not stuck in a static position: you can move about behind your barricade to get a better angle. You shoot in the direction of your mouse cursor.

There are plenty of weapons to find, and most of the early ones suck. If you don’t get some good ones early-ish in the game, you may as well start over.

You can carry two weapons into battle with you. The machine guns should be your default weapon. As for the second slot: the shotguns are fun but take too long to reload; the rifle is normally a one shot kill if you aim for the head but must be reloaded after each shot; and the chainsaw (the best weapon) will munch through zombies but is obviously only any use once they’ve already reached the barrier.

As for the zombies themselves, their look is randomly generated, making thousands of different creatures to see. I think I even saw a clown once…

There are a number of types: your basic, garden variety zombie; fat people, which have more health; and armoured baddies – go for the head or legs. And dogs. Resident Evil-style dogs (though there’s no windows for them to jump through). 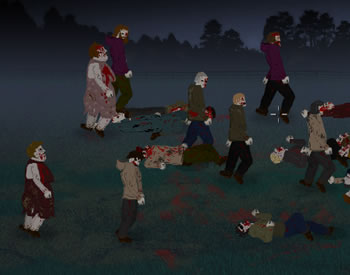 They’re a varied bunch. And variety is the spice of death.

What makes the game so much more impressive is the fact it’s apparently the creator Con Artist’s first game that he’s ever made. But with a name like that, can you really believe him?

Shoot some zombies, aim for the headshot: The Last Stand

To be continued... in the review for Last Stand 2!