The Alice Is Dead series is a reimagining of the Alice In Wonderland books and film, taking a darker and grittier edge (as all franchises seem to do eventually).

Each of the three games are basic point and click puzzle solvers – find and pick up items and work out how best to use them to progress.

In a sea of similar games, what a developer has to focus on is providing a good plot and puzzles (though sometimes one of these aspects can be great enough to carry the game on its own).

Alice Is Dead certainly sets itself apart from other games of its ilk through its sheer atmosphere.

The graphics in all the games are great and they have an old-time music soundtrack – I’m not sure what era they’re from but to me they evoke the 1940s/30s.

Let’s have a quick look through each game of the series.

The first game starts – no great spoilers since you read the title – with you in a room with Alice. 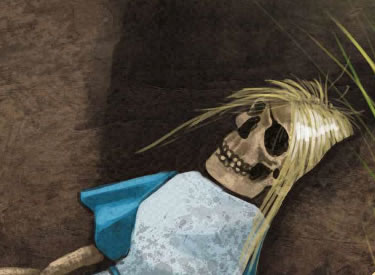 The first game focuses on your attempts to escape from the hole you have just fallen down. The puzzles are fairly intuitive but not all of them have immediately obvious solutions.

The main one I have to mention is what you use the looking glass for. It reveals some rather unsettling details about exactly what Alice went through before she died and further establishes the grisly tone for the series.

It’s little touches like this throughout the series that draw you in and keep you playing.

Go and play it now, because I’m going to reveal the ending to this one as I go over the next two in the series.

The entire point of the game is to regain your memory and remember who you are. You have amnesia you see. Cliché? No, because, see, he fell down a hole and hit his head. That gives you amnesia. Really. I saw it on TV.

This is a solid point and click adventure and intrigued me enough to want to play the next chapter in the series.

You start the next game in jail – or to be precise, Wonderland Jail. Something bad gonna happen.

You remember that you are the white rabbit – but you’re not quite as fluffy as you were in the book.

In this reimagining, you are an assassin who went back in for one last job. As you’d expect, it all went perfectly to plan. 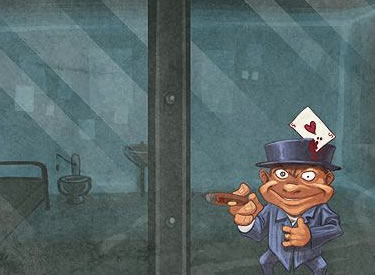 No, of course it didn’t. Why else would you be in jail. Hey, who’s that?

You meet the Mad Hatter, who is fully voice acted. This is a nice touch and it isn’t too annoying, as voice acting can sometimes be in flash games. You can skip it if you wish.

The puzzles in this are nowhere near as intuitive as the first one, unfortunately. One example is where you have to cut open someone’s chest – you can get the weapon you need to do this but the game won’t let you actually do it until it tells you to do so, which is annoying.

There is also a room that is very easy to miss. When you click on the lift, click right to find the computer room. I don’t know if it’s just because I’m thick, but it took me a while to discover that.

This one isn’t as satisfying but it progresses the story, which is enough.

And now for the grand finale.

The third chapter begins with a cutscene that finally starts giving you some answers. You hear the voice of the big villain who’s been behind the whole thing. Now you get to go after him.

It ends here, in a grubby old town.

This time the rabbit has a cell phone, which is used for receiving text messages as helpful hints.

Once you get inside your old hideout you can pick up the rabbit’s old journal, which gives even more of the backstory. To be honest, up until this point you haven’t really had much story at all – well, except for the fact Alice is dead – so it’s good to finally get some details.

The music is quite creepy and atmospheric too, unlike the first games.

The puzzles are better than the second one and in all this is a worthy way to finish the series.

The only sticking point is the ending. Some will love it, some will hate it, but the biggest issue is that there are some questions that go unanswered.

I didn’t really understand the reason behind the rabbit’s last assignment. I guess, given the fact the person who gave it to you is crazy, there doesn’t need to be a huge amount of logic behind it.

But what was the deal with the bell?

Play the series and try to uncover the answers yourself.