The Robot Wants… series has been one of my favourite games to play in a while. Sadly, with the fourth game, it has now ended but the story (such as it is) was nicely rounded off.

The games are of a Metroidvania style (each game is one big level where you collect various power-ups that allow to get to new areas) and are all put together well.

I’m going to go through each one and pick out good or bad points.

This was the first game – with a title like that, how could I refuse to play it? 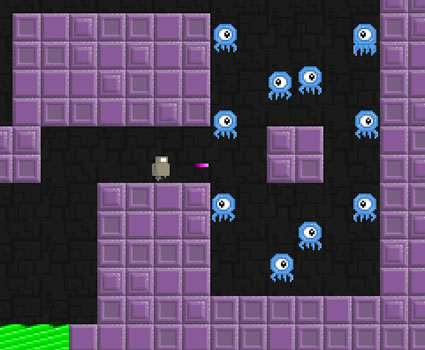 Kill the aliens, save the kitty.

This had basic pixel graphics, but they improved as the series went on. It still looks pretty.

The music is old school and fits the action well. The series has similar “roboty” type tunes throughout.

Your robot starts off only being able to move. He can’t even jump until you collect the first pick-up.

Slowly you build up his abilities, being able to fire lasers and charge at high speed across the screen (which can be dangerous if you’re not careful).

The power-ups in this one are fairly basic, but then again your robot hasn’t collected any friends to help him yet.

It’s easy to die as your robot is a one-hit wonder, but the only penalty you receive is a few extra seconds added onto your time. Annoying if you’re going for the record.

There are constant respawn points too – very useful, and well placed. These recur in every game in the series.

There is also an optional boss – prepare to see more bosses in later games.

The game was a blast and set up the series well – in fact, I’d say it’s my second favourite out of the series.

Anyway, robot wanted kitty and (spoilers) he got kitty. Which leads to…

Robot decides his kitty needs a friend, so sets out to get a puppy. The series has a nice sense of humour throughout – it’s not in your face, just nicely underplayed.

This time your kitty is here to help you! Hooray! 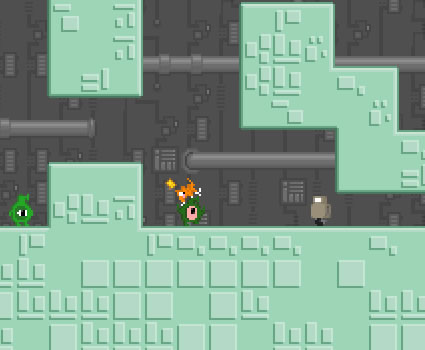 And he's violent too.

You attack by throwing kitty at the bad guys, setting up the growing relationship between robot and kitty.

It’s an antagonistic one.

Every time you hit an enemy with kitty, they immediately start running towards you which can lead to annoying deaths. Kitty also takes an annoyingly long time to kill enemies until you level him up.

I far prefer the original combat system – you can’t go wrong with lasers.

The enemies are also more aggressive – even the first power-up can be hard to get.

There are some nice touches though – until you get the requisite power-up, you have to go fetch kitty whenever he kills an enemy, and the kitty-copter is fun.

So robot gets puppy – but there’s a dramatic twist! Which leads to… 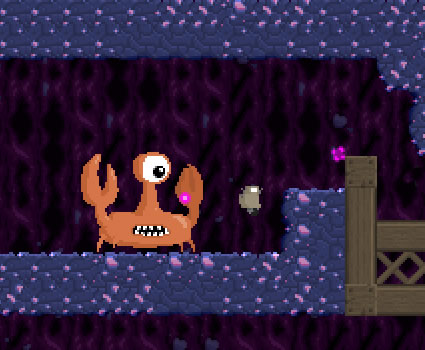 This game is set in an underwater cavern and sadly it’s my least favourite of the series.

The weapon (mines) are slightly better than the kitty but they’re still annoying, and at least kitty had the cuteness factor.

There is some more innovation in the skills set though, such as being able to go underwater and getting a shield, which gets you a much-needed extra hit. There are other pick-ups to get but I won’t spoil them.

So why is this my least favourite?

Basically, this game is a maze. You pick up a transporter chip early on, which allows you to teleport to different parts of the level.

There’s nothing wrong with mazes but you can spend several minutes at the start trying to figure out where to go. The sections are difficult as well, so it’s frustrating to go relatively deep in and realise you’ve hit a dead end. This can put players off.

A quick hint – get the weapon pick-up by going on the top route in the first area, then get the shield in the bat cave. Then you get the underwater power-up in the snails’ lair. After that, you’re on your own!

Plus points? The bosses are much improved from previous games and the ability to level up your abilities has been carried over from the last game.

Anyway, robot gets fishy. Which leads to… 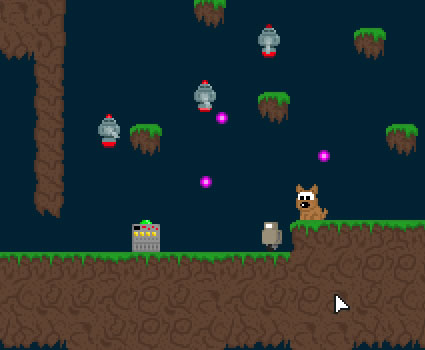 This is the best of the series. Be sure to watch the intro movie for a shocking plot twist.

This time puppy has come along to help you. Unlike kitty, he only acts as a back-up weapon but he has his uses.

Your mission is to fight off the aliens and get to the floating icecream fortress in the sky.

Your weapon this time is a spread laser and is the most powerful of all, especially if you pick up the secret banana cannon (I didn’t get it until after finishing hard mode. It felt like cheating otherwise).

The upgrades are varied and inventive, the level is laid out well and the gameplay is challenging but fun. You also get a health bar this time – no more one-hit kills.

The bosses are good and the enemies varied.

However, if you’re new to the genre, you shouldn’t start with this one. Play the series in the order it came out to see how it progressed.

The ending wraps up the game nicely, and it will give you pause for thought. Your reaction upon killing the final boss will be one of two:

1: Is the robot a hero or a villain? Sure, he has gone out and rescued creatures from hostile forces but only because he wants to, not out of some charitable grace.

The very title of the game – robot wants – suggests it has become self-aware and is beginning to feel emotions. However, it is unable to feel emotions for anything but itself. It cannot feel empathy and therefore acts on its own whims, doing the things that it feels is right without understanding the concept of right and wrong. In the end, his inability to feel true emotion leads to tragedy.

You want to play this: Robot Wants... Series.