The game I’m looking at this week is a combination of two types of game that I don’t normally play. For the most part I try to avoid them, for reasons I’ll go into as I go along.

Home Sheep Home is based on characters in a BBC kids show about, well, sheep. I only recognise one of the characters out of the trio you play as: Shaun the sheep.

He first appeared in the Wallace and Gromit short film A Close Shave, where he and his friends had to rescued from a robotic bulldog. It makes more sense if you watch it, which if you haven’t already, you should do.

I don’t know much more about Shaun apart from the fact he got himself a kids show, which I understand is quite popular. Kids love cartoon shows about creatures that will eventually end up on a dinner plate, right? 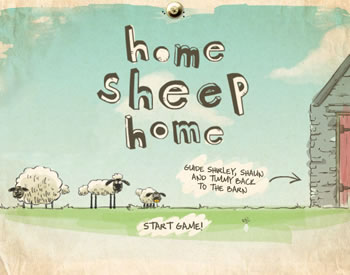 Poor fools, trying to find their way back to the farm. No idea what’s coming to them…

But don’t worry! Of course, this is a kiddies cartoon, meaning no animals will be harmed. Unless you fail them.

Anyway, I tend to avoid games that are spin offs of TV shows or movies because they tend to be cheaply done and of bad quality. Have a think and see if you can name any console game spin offs from the past ten years that rocked.

This wasn’t always the case, as in the eighties there were several fun game adaptations (even if they did all tend to be platformers).

But nowadays it’s all a matter of making a quick buck or, in the case of flash games, knocking out something that serves as a barely playable advert for your show.

Which brings me onto the next game type that this falls into: it’s a game for kids.

Such games, on the whole, tend to be aimed strictly at the lowest common denominator. They’re either too easy, too unsatisfying, or too shoddily put together to be any fun.

So how does this game fare? 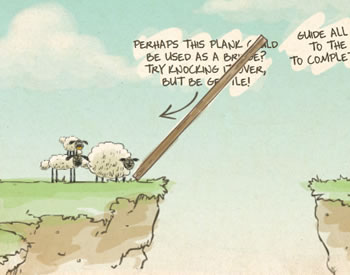 Three sheep on a mission.

It does fall prey to the “too easy” problem but it makes up for it in terms of game mechanics. In fact, if there had been a few harder levels I’d say it was a great game.

Before I talk about the gameplay, I’d like to compliment the graphics. They have a hand-drawn look that is quite appealing (I even like the fact the colouring in goes outside the lines sometimes) and as for the sheep themselves; their colours shimmer, giving them a lovely old-fashioned look.

They also baa and squeak nicely (try making the enormous Shirley jump on baby Timmy), although the only music is incidental.

Each character has different abilities based entirely on their mass: baby Timmy can get into small gaps, medium-sized Shaun has more leg power so can jump higher and further, and matriarch Shirley is huge and can push heavy objects.

This last power is put into good effect, with objects to knock down, swings to increase momentum, trampolines to push and blocks to carry.

You can also stack the sheep on top of each other to get over walls.

My main problem is that Timmy’s ability is underused – out of the 15 levels he only has to go into tight spaces a total of three times. Shaun comes into more use because his jumping skills are so versatile.

There was also one puzzle that I couldn’t get to work to begin with. 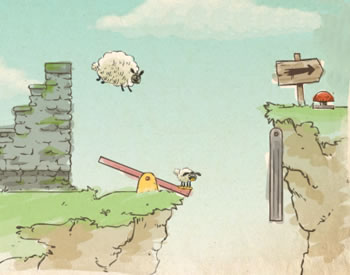 A seesaw? With a tiny sheep on it? Now what would happen if a bigger sheep were to jump on the other end?

The answer? Normally death. You see, it seemed to me that you had to click on the sheep’s faces in the top right corner to switch between them. In the time it took to do this, it was either too late for Timmy to make the jump or Shirley slid off the seesaw and into the pit of oblivion.

There is another way to get past this level, though it’s not the way you’re supposed to do it. Shaun to the rescue again!

But then it was pointed out to me you can use the number keys to switch quickly between the trio and then I felt quite silly.

I really enjoyed this game. Sure, it’s easy and could have done with some more challenging levels, but it’s got a happy, chilled-out vibe and the game mechanics work well.

And it’s one of those rare things: a spin-off game for kids that doesn’t suck.