Before you accuse me of animal cruelty, let me point your attention towards this grisly little game.

Insectonator puts you in a room full of bugs with a variety of weapons to destroy them with. They won’t attack you, bite you or even crawl up your leg – the only resistance they’ll put up is by running away from your increasingly violent methods of despatching them.

So, not a very deep game but a disturbingly fun one. 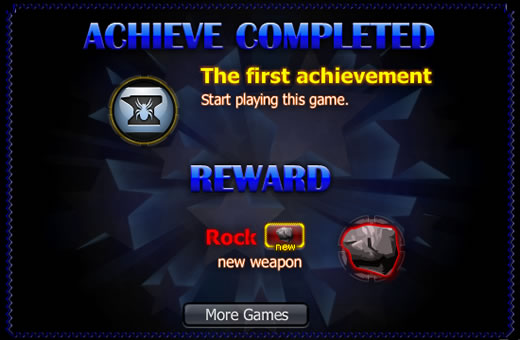 And you’ve got to love a game that rewards you for simply pressing play.

For such a simple concept, game creator FlyAnvil has put a lot into it. There are three different game modes, each of which takes the basic aim of the game (murderise critters) and puts a different slant on it.

You can either choose to kill every last bug, meet a quota for killing certain types of bugs, or assassinate a specific bug before moving on to the next target.

Everyone will have their preferred game type – I find the second mode is best for racking up a larger number of kills per game, which helps you towards gaining achievements. 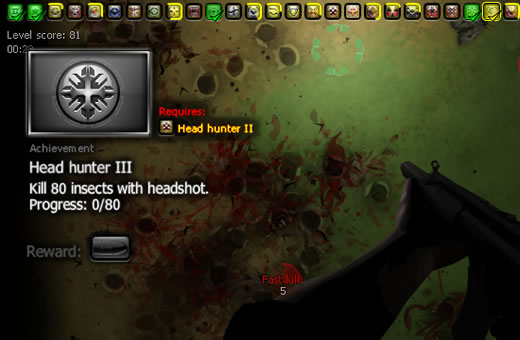 Yes, Insectonator is all about achievements – it’s the way you unlock new weapons. These achievements aren’t particularly deep but hey, it’s a time-killing game where you squish bugs. Did you expect sophistication?

Most of them will be earned pretty easily if you’re willing to invest the time – they include things such as killing a certain number of bugs with a certain weapon type, killing every type of bug and playing for a certain amount of time.

Each achievement tab shows the progress you’ve made towards completing it via a growing yellow ring of death.
It’s more fun than getting it on your PS3, believe me.

The weapons start out pretty basic (your first one is a rock) but you quickly gain access to firearms and from then on it gets increasingly ridiculous. Not many bug exterminators have napalm and bazookas in their arsenal.

As you’d expect from a guy who calls himself FlyAnvil, one of the weapons is (yes) an anvil. There’s an achievement linked specifically to this weapon – gain 20 headshots with it and you’ll be given the best weapon in the game (if not the most explosive).

And that’s all there is to say about this one. The graphics are good and the sound of those bugs crawling really gets under your skin and gives you further incentive to want them dead. As I said at the beginning of this review, if you’ve got some time to kill then give it a go.

I sincerely doubt that you’ll play it for two hours, though, which is the only achievement I never gained. I completed everything else with an hour to spare, and the only thing it gives you is a shiny medal.

If you’re willing to spend an hour squishing bugs for no noticeable reward, then you scare me.

On a separate note, it’s often said that serial killers start off by pulling the wings off bugs.

In this way, this game could be seen as performing a civic duty. Here, no actual bugs need to die and the only thing that these disturbed youths will go on to do is murder people in computer games.

Which, incidentally, is what you do in the sequel. The second game invites you to murder tiny zombies and is an improvement all round – new weapons, better achievements and easier headshots. 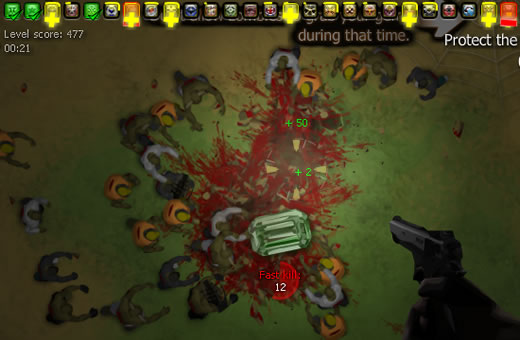 Try this one before going on to the sequel though – it’s a natural progression, after all.