The DuckLife series is a relatively popular set of games that recalls the Chao Racing minigame from Sonic Adventure.

In each of the three games, you are put in control of a duck and have to train up his abilities in swimming, flying, climbing and running before pitting him against his peers to see if he’ll win.

Here’s a quick review of each of the games:

DuckLife 2 – World Champion: it sucks, except now there are more hats to wear.

DuckLife 3: Evolution: it sucks, except now your duck evolves like a Pokemon.

Anyway, Animal Raceway is far better than DuckLife. It’s still not a perfect game by any measure, but at least it involves a modicum of skill. 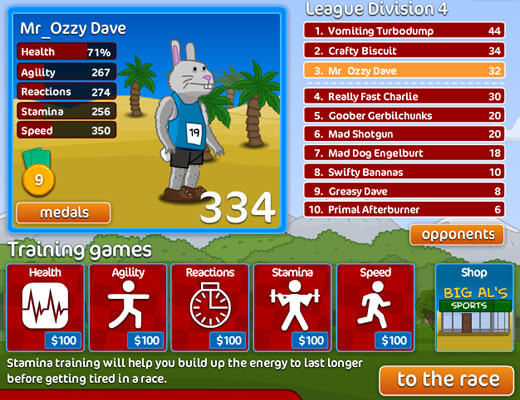 The first reason I don’t like it is because I think it makes ducks look bad.

The game also has incredibly simple graphics, while Animal Raceway is much more detailed. You also get a choice between ten different types of animal, all of which start with different stats that have a noticeable effect on gameplay.

These stats are Agility, Reactions, Stamina and Speed, each of which have a training minigame that you have to play to upgrade them.

Yes, it does sound a lot like DuckLife. In fact, I’m almost certain game creator Rob Donkin was inspired by the series – as I said, this game ain’t perfect.

Let me explain why it’s better. 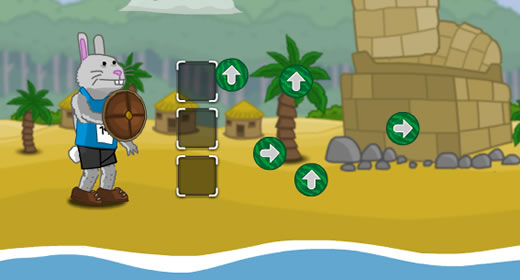 One of the reasons is that you can’t play as a duck, leaving the birds in peace so they can go be cute on a pond somewhere.

The four aforementioned abilities that you can train up in DuckLife only affect certain sections of a course. For instance, your duck could be the best runner, flyer and swimmer in the world, but if he comes up against a course that only involves climbing then he’s stuffed.

In Animal Raceway, you can still win even if one or even two of your stats is poorly trained, allowing you a little more leeway. You can also buy equippable items that can give you a major stat boost.

But the biggest criticism against DuckLife is that every training minigame is essentially the same – press a button to dodge obstacles. The experience you get from doing the minigames is also wildly imbalanced. In some, you’ll get to the highest level in one play. In others, you’ll survive for much longer but get a tenth of the experience you earned in the easy game.

Agility improves your ability to jump over hurdles - fall at a hurdle and it’s race over, which is annoying. To raise your skill, you have to duck or double jump over anvils. See, it’s already better – you press two buttons instead of one!

Reactions improves how quickly you start racing after hearing the starter pistol – get this high enough, and your opponents won’t start until a good five seconds after the bang (this is both funny and stupid). To raise your skill, you have to play a Guitar Hero-lite game, with each key press blocking a flying watermelon.

Stamina improves the distance you can run for before becoming tired, which drastically reduces your speed. Sadly, the balancing difficulties of DuckLife come into play here. You’re guaranteed to get less experience per attempt in this game than in any other. Luckily, you don’t need to get your stamina too high before further training becomes unnecessary.

Speed improves your speed. Yep. The minigame involves pressing keyboard keys before the timer runs out. It starts out showing just one key at a time but the amount quickly increases – it gets tough, but I’ve managed to get a lot of experience out of this game.

There is a fifth minigame that improves your Health, which is the most important stat of all. As your Health increases, it gives an incremental bonus to all your other abilities. The minigame involves smashing burgers with a hammer while avoiding hitting any apples. 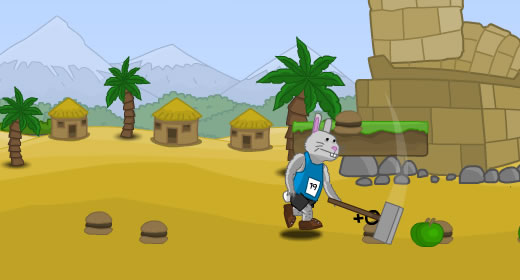 Forget those fancy diets – get healthy by destroying meat products!

Sadly, races play out exactly the same as they do in DuckLife: you can’t control your character, just watch and hope that your training has paid off. There are more tactics involved though, because you get different amounts of cash prizes depending on where you come in the race – without money, you can’t train. In DuckLife, you can just replay the training events over and over without penalty.

Animal Raceway even allows you to choose what course you want to race on, allowing you to go on courses that are better suited for your particular abilities. You also get to see who you’re racing against – do you dare face your nearest rival or do you go for an easy win against noobs? 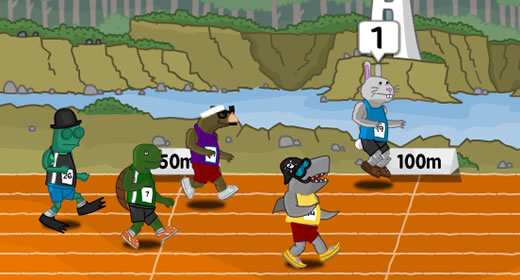 Each win gives you points – if you have the most at the end of the race season, you move into the next league, where you can do the whole thing all over again! Yay.

So, the final difference between the two games?

DuckLife is a step away from being an idle game.