My job is pissing me off at the moment. The work itself is fine but unfortunately I work shifts that can vary from 10am-6pm to 4pm-midnight, and it changes from day to day. It can get irritating.

Never to the point that I’d actually kill myself, because that’s a little extreme.

But if you’ve ever been so pissed off by work that you’ve fantasised about killing yourself then this game is about to make your dreams come true! 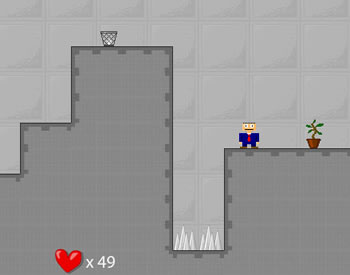 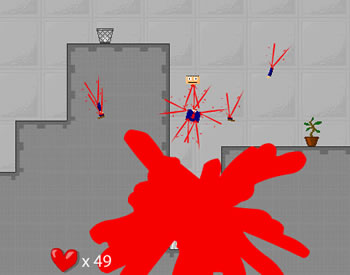 The name of this game actually stems from a real medical condition. Karoshi is Japanese for death by overwork, or occupational sudden death.

It tends to happen from a heart attack or stress (rather than jumping into a spiky pit) Not surprising seeing as, according to Wikipedia, the average Japanese worker does about two hours a day overtime (if you can believe anything Wikipedia says, yes, I went there).

So, kind of a sick thing to name your game after but a pretty apt title nonetheless. And there’s nothing wrong with a bit of sick humour.

The main aim of the game is to stick it to the man by killing yourself until all your 49 lives are gone (the blue-suited salaryman is kind of like a cat. Or rather, a cat times 5.4 recurring).

There are various ways you can kill yourself, such as by spikes, falling safes and electrocution. Which kind of begs the question “where the hell is this guy working? What sort of goods is this company selling? What about health and safety?”

Perhaps I’m taking it too literally. Perhaps the spikes are a metaphysical representation of the salaryman’s dissatisfaction with his workplace. Perhaps not. 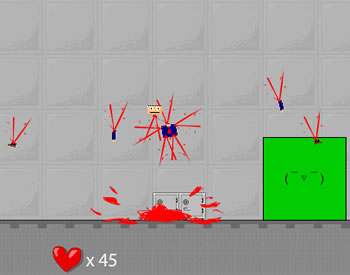 Who cares? This game has gory explosions!

You also have a gun that you can use to shoot objects to make them move. The bullets will also bounce off springs, coming back to end your life.

It would make more sense if the guy used the gun to blow his brains out, but I suppose that would make the game a little too easy…

Don’t worry if you fail to kill yourself first time, though, as there is a reset button. You will be using this more often as you progress through the game, as the puzzles get increasingly cryptic. The first example (kinda) is level 35 (the levels count backwards as you lose your lives) where you have to actually go off the edge of the screen to reach spiky nirvana. 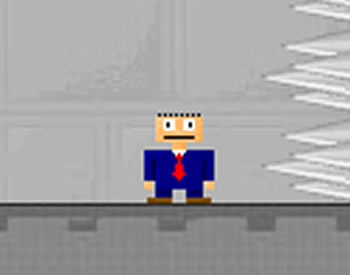 He may be expressionless, but inside he’s screaming with happiness at the thought of the sweet embrace of death.

This game is pretty good fun and is a nice subversion – obviously, dying is normally a bad thing (both in games and real life, so make sure those fantasies of yours stay in your head).

The only problem arises when precision is needed in your quest to kill yourself. The controls feel pretty loose and it can be frustrating trying to squeeze off a one-chance gunshot and missing over and over again. Some puzzles are also a little tricky to work out, but that’s part of the fun of a puzzle game. It gets good when the levels start messing with games physics and changing things that you thought you knew.

Other levels are too easy though, and can feel a little superfluous. The game is quite easy to blast through until about level 20, then it gets frustrating or great, depending on your preferences.

It is fun, though, and I can’t deny it that. And if you’re really, really pissed off with work, you could just pretend the blue-suited guy is your boss.

There is also a sequel, Super Karoshi, where you play a superhero with the power of helping people to commit suicide.

Why don’t you kill yourself: Karoshi: Suicide Salaryman