This is a game I missed when it first came out in about March 2009, which is a shame because on the face of it it’s a game that holds serious appeal for me.

The story is fairly basic. A white knight (armed with a drill, so his technology is far ahead of his time) is standing around with the princess, not doing much, when the sky suddenly goes red and an evil pink lobster kidnaps her. You must save her! 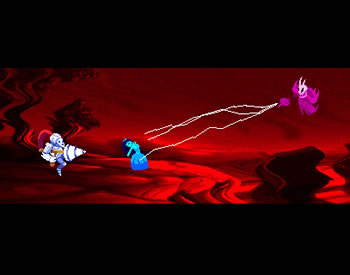 The gameplay is essentially Bejewelled meets Mr Driller, both two of my favourites. You take control of a good knight – except you don’t really. The only way to move him through the levels to defeat enemies, unlock doors and save the princess is by removing blocks; three or more at a time.

Your heroic knight will then fall onto items, enemies and exits so he can collect goodies, kill baddies and progress. You can also rotate the level to make him fall in different directions. 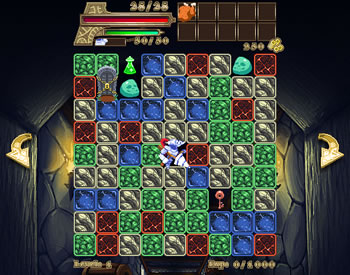 It'll make more sense when you play it.

Things are made easier by the fact you have to double-click blocks for them to break, reducing the number of level-breaking accidents.

You can also gain experience points by breaking blocks and killing bad guys (here’s a hint – when you’re about to complete the level, stick around and destroy a few blocks for extra experience). You get far more experience for killing bad guys but this can be pretty tricky.

You have a limited number of moves. After a certain number of clicks, the knight will start taking damage for every group of blocks you destroy (although he will never die this way). Your HP is taken over to the next level as well, making it tricky to complete the game without using a continue.

All of the enemies attack in different ways and you can click on them to get hints on their abilities.

The evil chickens don’t attack you, but you still get experience for drilling their faces off.

There is a shop at the end of each level, which allows you to buy some much-needed power-ups.

One neat little touch I noticed (frequently) was when you die your knight turns into a skeleton, as in Ghouls And Ghosts. He never strips down to his boxers though.

It takes all the elements of Bejewelled and puts it into an adventure game that’s quite fun and relatively easy to get to grips with.

There is, however, one major flaw:

You see, in copying Bejewelled the game has also taken on its major problem of the randomness of how the blocks fall. Add to this the randomly spawning enemies, on which there seems to be no upper limit, and indestructible blocks and spike traps, and you can end up with levels that are literally impossible to complete.

I thought, fine. I’ll get through this game, it’ll just be a case of trial and error. 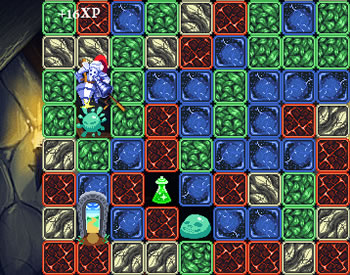 Then I reached the end boss, and oh boy… you have to reach him within a time limit to attack him, otherwise he hurts you for a third of your health. There are indestructible spike blocks that can hem him in and make it impossible for you to reach him. There are enemies spawning. And you have to hit him more than two times.

I couldn’t beat him. And there was no way to get to the shop to buy the potions I needed – this is confusing, because I had amassed quite a bit of money in the past couple of levels and this was the final boss. There’s no need for the money after you’ve beaten the guy.

What I should have done was to milk every single level for bonus experience and items, but I was busy having fun back then. I didn’t know how hard it was going to get.

Anyway, don’t let this put you off. The game is fun for the first three levels. It’s the last two that are horrible.

More importantly, there is a sequel that deals with most of my complaints and is apparently a much better game. I wish I’d played that one instead. Sigh…

Play it now, if you think you’re hard enough (and if you beat it, put an ending video on Youtube so I can see how it ends): Knightfall