There have been quite a few games where the aim is to save the lives of a cute gang of critters. The ultimate example of this style of game is Lemmings, which was based on the Disney lie that these animals enjoy jumping off cliffs.

They would wander aimlessly into hazards unless you stepped in to make them perform tasks that would get them past the levels. Of course, it soon got frustratingly difficult and at that point it became more fun to simply blow them up. 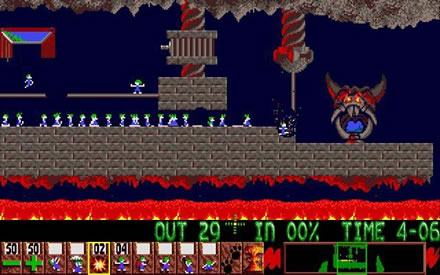 Of course, looking back, the Lemmings weren’t particularly cute. Their head was basically a massive nose, they had freaky green hair – to be honest, they deserved to die.

But the creatures in this game are cute and as an added bonus, they’re not stupid/suicidal. There’s also no nuke button, so killing them off isn’t as fun as in Lemmings.

The cute little Meebling stay stationary, waiting for your commands. Some of them have their own special abilities, which you have to use to get a certain number of Meeblings home.

So for a start, they are more capable than the Lemmings, as well as being cuter. Their voices are just as squeaky, but there’s a certain charm in hearing one of them squeal “away!” and seeing its friends scatter. 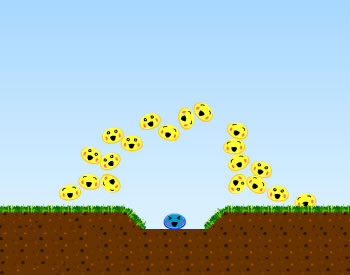 There are seven colours of Meeblings, each with their own powers. Whenever you hold down the left mouse button on one of them, their power activates and they close their eyes in what looks like ecstasy.

The yellow and blue guys are Herelings and Therelings, who can call Meeblings to them or push them away. You’ll be using these guys the most as they are the best way of moving your Meeblings about. They are also quite powerful – now I think about it, the Thereling is probably the closest thing this game has to a Lemmings “nuke” button. Just activate them and watch as they send their friends flying to their deaths.

The pink (female?) Gravling can make gravity its bitch and send its friends flying up to the ceiling (or into outer space if there’s no ceiling).

The Sizzling, which is bright red, can burn through floors. Click on it and steam rises from its body (this one definitely gets some sort of pleasure out of what it’s doing. Just look at its face). Luckily he can’t melt his friends through his sheer hotness.

The green Treebling turns into a tree. Not only does this aid the environment but it also acts as a barrier to stop its friends getting into trouble.

The grey Zapling can turn off fans. There are two types of fans – helpful ones that blow you into your goal and evil ones that mince you up horribly.

The final one is the main type you’ll come across – the Feebling, who can’t do anything. They are the only ones without a smile on their face, so they probably realise how useless they are. 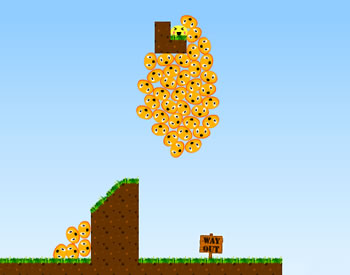 Look at them. Totally helpless.

There are only three real hazards in the game: falling off the screen, getting sucked into a fan and just not reaching the level quota of Meeblings to save.

That’s all the hazard the game needs to be difficult though, and it makes good use of the powers available to create some tricky puzzles. A few had me looking for a guide.

It’s a good little game that deserves recognition. The physics engine is nice, though it can sometimes leave things to chance, and the Meeblings themselves have cute personalities.

There is a sequel, which in my opinion is even harder than this one. It adds two more Meeblings: one that can turn into a goal, basically giving you a movable exit point; and another that can turn into any other type of Meebling, leaving you to work out which one will help you beat the level.

Get acquainted with the lovely critters: Meeblings