I’ll admit right now that racing games are not normally my thing.

The whole deal with computer games is that they are supposed to entertain, to enable you to do things that you can’t usually do.

I drive a car every week and even the prospect of racing one against other people isn’t enough to make these sorts of games dull to me.

But something such as Mario Kart or Burnout holds a great deal more appeal. The use of power-ups, turbo charges and the opportunity to destroy your opponents isn’t something you can do on your average car journey.

You don’t often get to drive a wireframe neon car either.

Neon Race, the latest game from Long Animals, has a futuristic look from a viewpoint that mimics Outrun.

The game’s levels are unlocked as you beat the target time for each one. Along the way, you can earn cash to upgrade every aspect of your vehicle so you are able to beat the harder levels.

Cash is gained by collecting the handy cash icons that someone has littered around the track. If you collect them in a long chain without missing any, their value increases by 10 each time.

Comboing cash icons is important to earn enough money for your upgrades but it’s made a little tricky by all those other cars in your way. However, most players should be able to collect enough to sail through most of the levels.

You travel much faster than the other cars anyway but you can also earn turbo boost to really put them in the shade.

Turbo is gained in a rather anti-social way. You see those red vehicles? One touch from your car and they’ll explode! 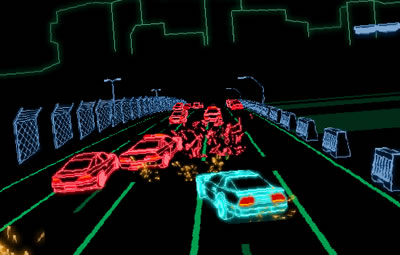 Turbo is activated by pressing x or n, which doesn’t seem like a natural choice when you’re controlling your car with the arrow keys. Space may have been better.

There are also power-ups to aid you on your way, with the best one turning all the other vehicles red.

Your main obstacle to getting the time you need (aside from the standard of your car and/or driving skill) is the purple cars.

You can’t destroy these vehicles, so if you touch them you… get knocked to the side a bit. It can be deadly though. 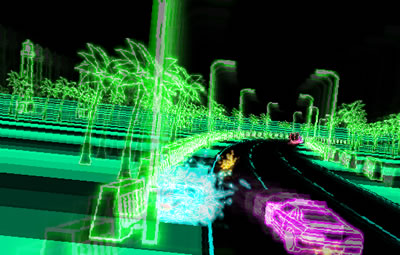 BOOM! That was you dying in a shower of metal.

The only way your car can be destroyed is by hitting the sides of the road, which can lead to an amusing glitch. If you drive off the side of the road during your phase of temporary invulnerability after a smash, you can spend the rest of the race driving on thin air alongside the road. This does slow you down hugely though, so don’t expect any record times with this method.

This game is good fun and has a nice sense of speed, but it’s a shame that it’s so easy. I only had to replay a couple of levels before winning.

Your reward for beating the game is a supercar, which makes the levels even easier. I would have liked to see a new hard mode instead, where the purple cars can kill you on contact. That would have been a real challenge. 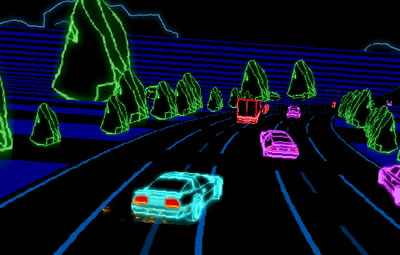 As it is, this game is really good fun and I say that as someone who’s not normally a fan of racers.