Well, Easter is over and everyone has stuffed their happy faces on chocolate eggs to celebrate the rise of zombie Jesus.

So what better way to celebrate the end of this holiday than a game about a cake-obsessed bunny?

Most rabbits want carrots, all of them want sex, but this little guy goes against the crowd. There’s only one thing he wants but he’s going to need your help to get it.

That’s why, according to the intro screen, he can’t wait to meet you.

The second thing you’ll notice about the bunny (the first being that he’s orange) is he has a remote control device in his back.

That’s because this game has a pretty innovative control system. Instead of controlling the bunny directly, you have to input your key strokes as a pre-recorded stream of actions, then order the rabbit to carry them out and hope they lead him to the cake. 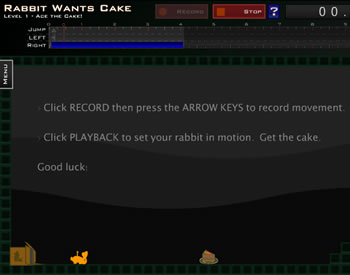 The rabbit’s a fast little bugger, which can lead to some tricky situations. More on this later.

The levels become increasingly difficult as you go on but are pretty easy to start with. There is a normal mode, which allows you to make minor adjustments to your runs, or expert mode, where if you fail you have to record your actions all over again from scratch.

You get a time limit of ten seconds to record your actions, which is more than enough for most levels.

It’s quite a cutesy little game too; the music has a bit of comical flair, the bunny is sufficiently cute and there’s no gore. If the rabbit lands on spikes, he just explodes into shards.

What, you didn’t think it’d just be jumping puzzles, did you? It’s hazardous being a rabbit.

Another cute touch is the little comments the game makes after you complete each level. I won’t spoil them here, but needless to say that little rabbit really appreciates all that cake you’re getting for him.

Anyway, tricky situations. After level ten, you can expect the difficulty to get pretty harsh. Precision jumps will be needed to get through, and as you can’t see what you’re doing you’re going to have to get familiar with how fast you bunny moves and how far he can travel in a certain time period.

And doing all that on one run? It can get so difficult it verges on the masochistic.

Prepare to see that poor orange rabbit explode a hell of a lot (but he still really appreciates all you are doing for him).

It’s a game by jmtb02, so if you’re familiar with his work you’ll know what to expect. Often aquirky little game that’s quite fun but won’t be for everyone, with simple controls and an unusual concept.

But before then, get your head around this simple fact: 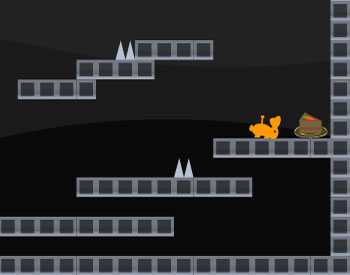