The Bloons franchise has been running since about mid-2007 and in that time it has spawned several sequels.

We have seven of those on our website and there’s even more out there, so the creator – Ninjakiwi – is a busy guy.

In every one of these games, you play a monkey who is determined to destroy balloons. Quite why he has such a vendetta against the inflatable playthings is anyone’s guess. Perhaps he had a traumatic experience when he was young.

Maybe the monkey is the natural predator of the balloon. 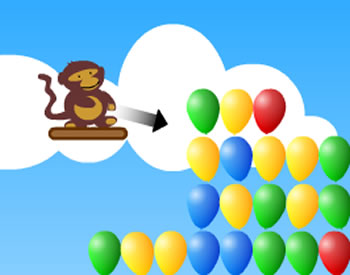 Look at him – he’s got the eyes of a stone-cold killer.

Anyway, the basic premise of the first series of Bloons games is your monkey has a limited number of darts to burst a set number of balloons. There are bonus weapons such as bombs and boomerangs to combat obstacles such as blocks and balloons that freeze everything solid when they pop.

The game was an instant classic and the creator went on to improve the formula with different types of balloons and items, but the gameplay remained largely the same.

The problem I always had with it was I found it way too difficult, but this was solved by the fact there was an unlimited ammo mode (though even then some levels were damn tough).

The next series of games was Bloons tower defence, where our protagonist monkey got a bunch of his friends together to stop the balloons from getting past them. If a certain number escape, you lose. 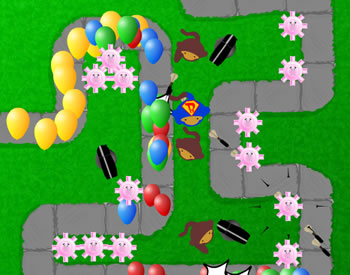 All balloons must die!

You can upgrade your towers and the balloons come in ever stronger and longer waves. Just like any other tower defence game really and sadly not one that caught my interest. I didn’t think it was anything new and, again, I found it too difficult.

So on to the latest style of game to come from the Bloons franchise: Bloons Super Monkey.

This time you play, as the name may suggest, a monkey in a Superman outfit in a screen-scrolling, action-packed shoot-em-up. 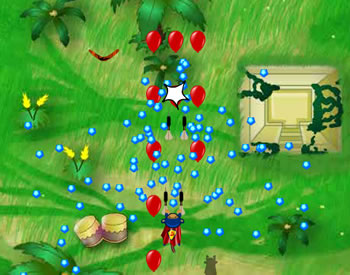 I have no ideas where the darts are coming from. He either has the power to generate them from thin air or they’re coming from his mouth. There is another option that I don’t really want to think about…

I enjoyed this game far more than any other in the franchise. Let’s go over the reasons why:

1: The gameplay is much more fun. Your monkey shoots automatically, the available upgrades are useful and fairly priced, and it’s kinda cathartic to blast all those balloons back to meet their maker (who I assume is a toy manufacturer).

2: It’s a decent challenge. You have a set target to reach in every level, and after reaching it you can go on to other targets to get silver or gold. Some people have complained that it’s too hard because there’s no retry option but anyone who’s familiar with this type of game shouldn’t have any trouble. The challenge comes in getting the highest score by getting gold to obtain a bonus multiplier, which I achieved in most of the levels.

3: By now the creator’s been making these games for years, so it’s well polished and well presented. The only issues are that sometimes the action gets too intense and lags, and some of the upgrades seem to lead to a loss of power until you buy the next level.

Also (being real picky) it’s a bit odd that when you pop the stronger balloons they don’t burst but instead change colour. Are they like Russian dolls, with loads of balloons inside each other?

The best way to get through the game is to make sure to pick up the currency that flies out of the burst balloons whenever you can. Buy the side weapons (missiles and energy tentacles) when you can but focus most of your time upgrading the main weapon until you are a monkey-shaped death machine. 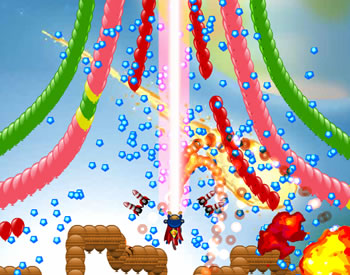 So that’s Bloons Super Monkey, certainly my favourite in the franchise.

But why is this monkey attacking these balloons? What have they ever done to him?

They haven’t done anything. They’re innocent.

They’re not the enemy. After all, they never do anything to hurt the monkey. It’s the monkey who’s the bad guy.

He’s come to their world to kill them all, just for his own sick pleasure. And you’ve all helped him. Millions of innocent balloon lives, all mercilessly wiped out in the name of your fun.

Try not to think about all those poor balloon families: Bloons Super Monkey