Copy Cat came out in about November last year and I really liked it at the time. I don’t know if it got as much attention as it deserved because it’s an interesting little puzzler. 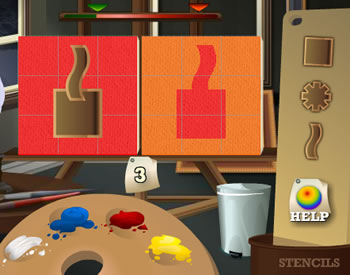 I be an artist.

You are given a blank canvas and the aim of the game is to recreate a simple design made up of colours and shapes, which you do by placing stencils onto the canvas and painting away.

You are given a percentage rating as to how accurate you are, and once you reach a certain level of accuracy you can move on to the next level. This gives you a bit of leeway – unfortunately you’re highly unlikely to have the precision needed to score 100 per cent on any of the levels.

From the second level onwards you are expected to mix colours, such as yellow and blue to make green. You also have to become more creative in the way you use your stencils, covering up bits you’ve painted before so you can white out the rest and repaint. 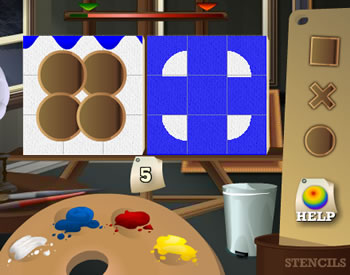 This is pretty early in the game and already it’s testing the old noggin.

There are 30 levels, and with the difficulty rising incrementally it’ll last you a little while. Some of the later ones look like proper impressionist artwork (or something) and will have you scratching your head as to how to recreate them.

I also have to mention the background music. The classical tune playing is incredibly soothing and really suits the style of the game – makes you feel like an artist in repose.

As to how much you’ll get out of the game, it really depends on what sort of person you are. As I said before, I found the overall atmosphere of the game very soothing but it’s not the sort of thing I’ll finish in one session. My brain tires easily.

Some people won’t have the patience for it and will be turned off from the first puzzle. Others may get annoyed by the complexity of the later levels.

But it’s definitely worth a go, just because I can’t think of any other puzzle game like it that makes you feel satisfied rather than frustrated.

Let your artistic side out: Copy Cat