It’s been a long while since I wrote a flash game review, and quite a few great games have come out in that time.

The reason for my absence is down to my personal circumstances. Something unfortunate happened to me, which meant that writing reviews was not my number one priority.

What happened to me?

Well, I was out shopping one day when I suddenly got abducted by gummy bears and taken to their magical kingdom. They held me against my will and forced me to wrestle for their entertainment.

Eventually I managed to break free by using the wrestling ring’s ropes to catapult myself out of captivity, using my rocket-powered underpants to hasten my escape and take revenge on my captors.

This flash game tells my story. 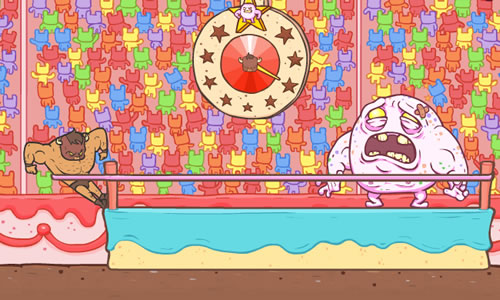 This is me, prior to my escape.

This is another one of those “see how far you can throw something” games in the same ilk as Toss the Turtle. There are various obstacles that will help or hinder you on your journey and you can upgrade your character to enable better attempts, earning cash in the process.

The main way of progressing is to bounce off those dastardly gummy bears – hitting them will reduce the rate you lose your speed, while hitting the floor will drastically slow you down.

There are also police gummies that will instantly stop you if you’re going too slowly. Those guys were bastards.

Aside from the power-ups that you usually get in games of this type (more powerful initial throws, reduction of friction, cash multiplier) you can also buy more uses of the aforementioned rocket-powered underpants. Using these will slam you into the ground, obliterating any hapless gummies underneath you and helping to boost your speed. 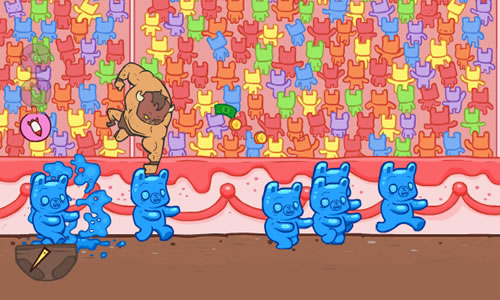 This move also gives you a certain degree of control, which these games often lack. With careful use of your underpants, you can guide your character into special gummies or avoid hazards that you wouldn’t be able to avoid otherwise.

This is a massive boost for the game’s playability and helps to cut down on the frustration that often comes with this genre. That, combined with the sheer character inherent within the game’s graphics and design, make this one a must-play.

The special gummies also add greatly to the gameplay. These can be upgraded as well, increasing the likelihood of you seeing them during your great escape (see, what I did was bribe them to help me get out of there. They didn’t realise I’d be killing them later).

All of them add another level of control, some needing skill to make the most out of their powers.

There are: bubble gummies (mash buttons to fly higher); hang glider gummies (tap buttons at the right moment to fly higher – could never do this right, so I guess I’ll never make an extreme sportsman); rocket gummies (you get a rocket – yay); pogo gummies (click just before hitting the ground to bounce higher on your pogo stick); and red hot pepper gummies (bit silly this one – tap buttons rapidly to slam into the ground and most likely hurt yourself when it runs out).

There are also standard gummies that you don’t have to pay to unlock – moneybags gummies, bouncy gummies and suicide bomber gummies (guess they got fed up with being so delicious). 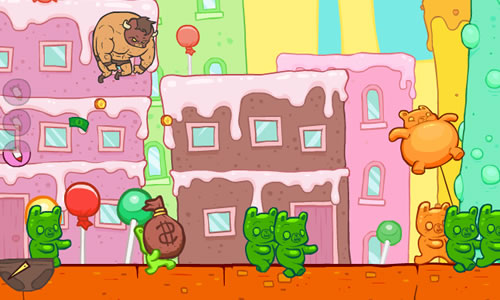 Look at them all. A diverse range of gummies living in harmony – about to die by your hand.

The final obstacle I had to overcome was the walls and locked doors that the gummies had placed in my way.

There are three of these, each one taking you into a new area – but if you’re not at a good speed by the time you reach them, you will smack into them facefirst and get caught. This means that you can’t complete the game by just gently rolling across the finishing line – you have to smash it! (Insert random Richard Keys joke here)

Eventually I managed to escape from my captors but by the time I had done so, I had been made unemployed due to non-attendance at work. I told them about the gummy bear world but they didn’t believe me. In fact, my story just seemed to convince them they’d made the right decision.

Ah well. Sucks to be me.

But if you want to recreate my daring escape from the gummy bear world, give this game a try. It’s a strong example of its genre, possibly the best out there.

Based on true events: Burrito Bison