I’ve already reviewed the first game in the Crush The Castle series, and found it to be very good fun. You were put in the shoes of a vicious army in medieval times plotting to take over all of the surrounding kingdoms by, well, crushing their castles and killing everyone inside.

You did this with your mighty trebuchet, which fired rocks and bombs at your hapless enemies to either squish them or blow them up.

Anybody expecting a radical change in gameplay in the sequel is going to be disappointed – hey, the name of the game should have given you a clue.

What this game does do is take everything that made the first game good and massively expand upon it.

Before you had basic rocks and bombs to take down the castles, and the materials that said castles were made from only varied in that some structures were stronger and heavier than others.

Now there are many more things to destroy your foes with. You start with the most basic of weapons (um, logs) and move up to steel missiles and bombs. Your bombs include ones that can parachute into a certain spot and others that can be detonated remotely.

But there are even more powerful, magical weapons which can affect castle materials differently. I won’t reveal them all here, but they include a fire bomb, which sets wood alight and burns people alive, and an electricity bomb, which doesn’t knock anything over but will electrocute anyone standing on metal. 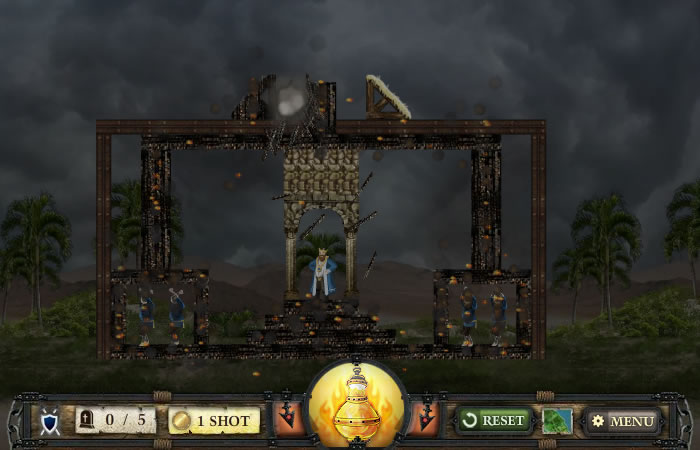 Another good touch is now when people die, they explode into gravestones, Worms-style. Kinda makes sense that when they get blown up or squished there wouldn’t be anything left of them, and it stops their corpses getting in the way like in the first game.

This is a good sequel, improving on everything that has come before. It’s also more challenging to beat in some places too – you have to use your arsenal wisely to get medals for beating each level in the lowest number of shots, because your strongest weapon isn’t always the right one to use. 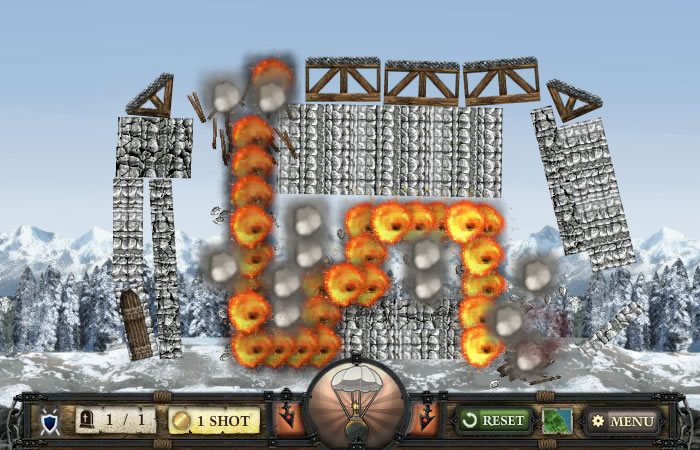 Crush your enemies: Crush The Castle 2