That will probably be most people’s reaction when they first play this game.

To be fair, Canabalt is the first game most people think of when it comes to the niche “press a button to jump over a rapidly approaching series of pits” genre. For a while, it was the best.

But having played this, I believe we have found its successor.

For a start, look at this game’s name. With a name like Epic Coaster, you expect something truly exciting and special. Does it deliver? 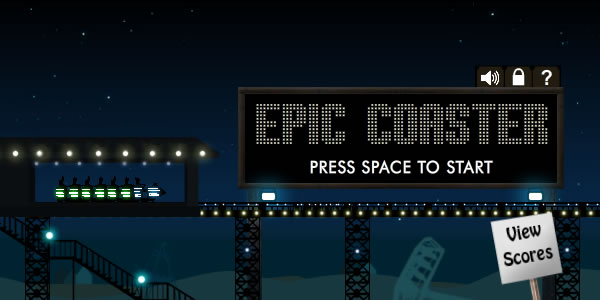 You begin playing the game and the only innovation it seems to have brought to the table is nice, shiny graphics. Your rollercoaster cars light up at night and when you land on some platforms you set off special effects in the background, such as planes swooping overhead and fireworks going off.

A balloon goes by every 1,000 metres to tell you how far you’ve come, and eventually you’ll mis-time a jump and your patrons will fall screaming to their deaths.

So far, the only difference between this and Canabalt appears to be the amount of guilt you feel in letting these poor guys die.

Then you notice the score counter in the top right corner. The game isn’t measured in how far you travel, but how many points you score.

The score counter keeps on rising depending how long you survive for. So how is that any different to distance travelled?

Because every time you set off one of those aforementioned special effects, you get a score bonus. You can also get extra points for landing on the bonus rail twice by making a little hop. 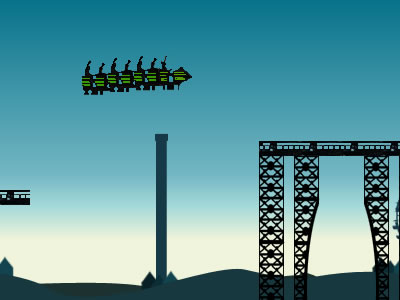 Rack those points up and try to ignore the fact that eventually, the guys in the coaster car are going to fall and die.

But these special rails come along randomly, so where’s the skill?

Glad you asked. The skill comes in landing a perfect jump, barely landing on the edge of the rail you’re jumping to. This gives you a large points boost and you get a multiplier for every jump you make in a row, giving the potential for some massive scores.

Of course, the risk involved in just barely landing on a rail means that a slight miscalculation will end your game.

Then there are the several achievements you can earn. In most games, the achievements are largely pointless and don’t affect the gameplay.

It’s far better in games such as the Bunny Invasion series (shameless plug) where these achievements give you points that unlock extras or, as with this game, increase your score multiplier.

So the more achievements you attain in this game, the higher your score will be and the easier it will be to get on those leaderboards.

And the gameplay is so addictive that you’ll want to keep on playing. I don’t know whether you can travel far enough along the rail to actually reach the end of the track – the 15,000m achievement is still just beyond my reach and there’s another, tantalisingly named achievement after that one.

I also haven’t got the best score achievement yet, but my highest is just a couple thousand points short of a million. You can bet I’m going to keep playing to find out what I need.

The only slight complaint I have is the game sometimes lags when achievements pop up. It’s annoying to reach 10,000m then fall to your death because the game froze.

But all in all, this game has conquered Canabalt in my opinion. 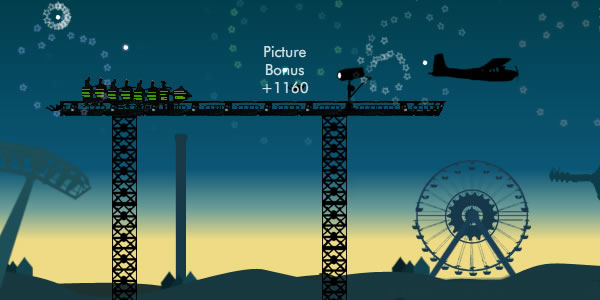