The Gun Game has returned and there are quite a few differences. The one thing that hasn’t changed, though, is the fact there are lots of guns to shoot. Yep.

The original thing had lots to do, with the basic games including defence, shooting a small target in a small time limit and shooting other guns before they shot you back.

The final, hardest challenge was shooting a stack of crates so a certain crate would land on a specific target zone.

There were plenty of guns to shoot with, and these all had challenges to complete. These challenges would make your gun stronger once you completed them – the problem being that once you had done all a gun had to offer, you would move on to another gun and not really make use of these new perks.

Unless you really liked guns. 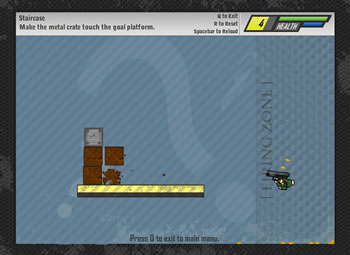 Well, all these challenges have returned in the sequel.

The defence mission is now a survival mode, the sole objective of which is to earn cash.

And the missions where you have to kill guns firing back at you has more or less stayed the same, though there is a nice treat waiting on the final stage of the elite missions.

The crate puzzles have been extended, with new gravity switches and explosive crates adding to the fun.

The individual gun challenges have gone, which is kind of a shame but I can understand why. Instead, you can just buy the perks straight out – and these additions are shown on the gun itself.

There is also a level-up system for completing missions, where you can unlock personal perks such as gaining experience or damage multipliers.

And for those who really love the game, there are some achievements that will keep you busy for ages.

So, the same game with a few improvements and some annoyances taken out. But there is one problem.

The menu has been implemented in a poor way. The mission menu is on the shop screen, and there’s a small arrow you have to click to access more than just the easy missions. That’s the main bulk of the game almost hidden away there.

That arrow just there. My brother got confused by this.

Also, you buy guns in the shop but to buy the perks for them you have to look at them in your arsenal. It’s a bit of an odd set-up.

Aside from that, if you like shooting your gun you’ll like this game. It will need a bit more variety if there’s going to be a third, though. 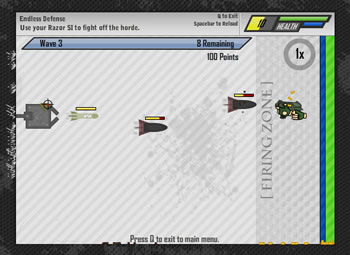