The Gravitee series of games is a novel take on the noble game of golf, with a twist.

It is set on a series of planets rather than the typical greens and fairways. Instead of putting your ball in a hole, you have to hit it through a hoop or a series of floating loops.

As you might expect from the game’s name, gravity plays a major part. Each planet has its own gravitational pull; the larger the planet, the stronger its pull. This has to be accounted for whenever you take your shot.

There are also hazards to overcome, such as burning suns that destroy your ball, giving you a penalty. 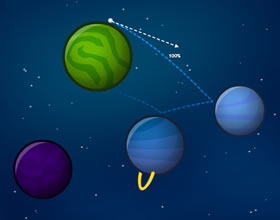 Do your best to get a hole in one to get a gold star.

There are multipliers to increase your score and skilled players will be able to pull off looping shots, curving round several planets and generally showing off.

I was never that great at it, but I could pass through most of the levels even if I just earned a bronze.

It was a smart little series that rewarded those who took the time to become skilled at it. Eventually, though, every series has to evolve.

And how has this series evolved? There’s a clue in the title. 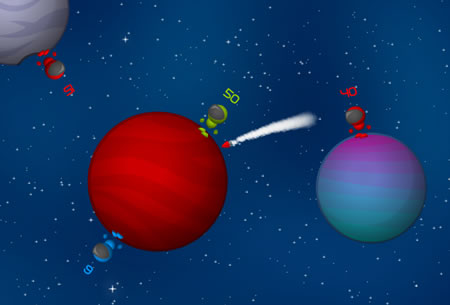 The key mechanics are still in place. You take a shot and your projectile is affected by the gravity of the planets and suns on the playfield.

The only difference is instead of potting balls, you’re blowing stuff up. The game now closely resembles the classic multiplayer game Worms, complete with bazookas and outlandish attacks.

Your standard weapon is the bazooka, which will be all you need to sail through the first few levels. The planets are fully destructible, making them harder to navigate quickly, and gravity is incredibly deadly. Seriously, for the most part it’ll be what kills the most people in the first stages.

One explosion at the feet of a spaceman, and he’s going on a ride he’ll never come back from. 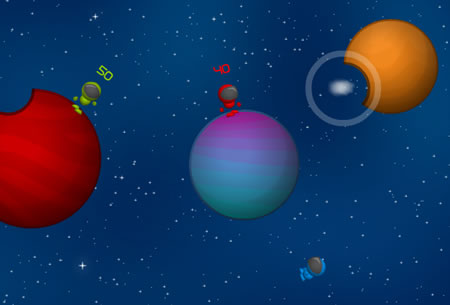 He’ll float forever, only dying when his air supply runs out.

Things soon get tougher, but luckily you are rewarded with cash for any kills you make, regardless of whether you win or lose.

You can use this cash to upgrade your spacemen’s health and accuracy (this appears to lengthen the laser sight on your weapons), as well as buy new team mates. You can also buy weapons whenever they become available.

Some players just repeat the first few levels over and over to farm cash, but this is totally unnecessary and takes the fun out of the first playthrough.

The extra weapons include standards such as cluster bombs and mines, up to more outlandish weapons that I won’t spoil here. They all have a purpose and are well balanced.

The more you upgrade your team, the easier the game gets. But don’t worry, there are medals to be earned.

These depend on the number of turns it takes you to destroy your opponents. There are also achievements to unlock; the more you get of these, the more bonuses you will gain.

These include cute animations for your cute little spacemen and other nice touches (though the last unlock is a little obvious and, by the time you get it, useless).

This is a great little game, unless you’re put off by the close similarities it has to Worms. Everything is well balanced and there’s scope to make an even better sequel.

There are only three niggles:

1: Movement is confusing sometimes. Depending on where you are on a planet, the directional keys can make you go in different directions. This is annoying if you have pressed left to go clockwise, stop, then press left again and start going anti-clockwise.

2: It’s easy – though this does mean moderately skilled players shouldn’t have too much difficulty getting all the achievements.

3: There’s no online multiplayer, although the creator has said he may be making an update soon. That should be something to look out for.