Before reviewing My Little Army I have to share my thoughts about the Epic War series, because this game is an off-shoot of that.

Unfortunately, I can’t claim to be any sort of expert on the subject because the only one I played at length was the third one. Ah well, here we go.

Every game in the series sets your base against another one, with a straight path between you and your enemy. You have a range of spells and units at your disposal that you can use to take down the troops your opponent sends at you before you make a counter-attack and destroy their base.

Each game was a progression of that basic idea – use your resources wisely and choose the right moment to strike with the right attack or troop. You fail if your base is overwhelmed. 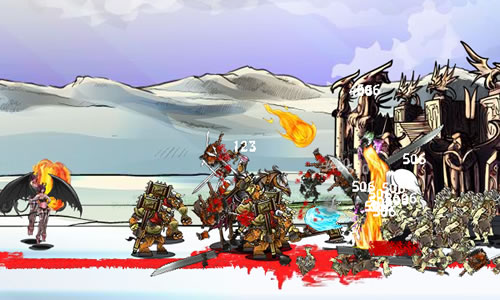 This is Epic War 3. Hope you find this picture suitably epic.

At it’s heart, Epic War gameplay is one of attrition. It’s likely that you’ll lose a lot of troops, as will your enemy, but there are always more to take the place of the fallen. Of course there are ways to protect your troops from the reaper in later games – inactive grunts will slowly regain health in EW3 and there are some healing spells.

By the time it came to EW3 there were plenty of different troops that you could select, though you could only take a few of them into battle. Should you go with the strongest fighters, which spawn slowly and are limited in number, or do you go with weaker people, of which you can have more than a dozen on screen at any one time?

You also had a leader, who had powerful attacks and lots of health, who could either lead the charge or stay at the base to make a last stand – or both, seeing as you could order sections of your troops to advance or retreat as you saw fit.

There was a sequel (titled – wait for it – Epic War 4) but I never played it at length. As far as I remember, it extended the “leader” concept, allowing you to choose between a wider range of heroes.

My main problem with the series was that it never really engaged me. It was something to play while listening to music. The graphics were good but also bordered on generic, and the battlefield was zoomed out too far to allow you to see the detail.

The gameplay, as I said before, was based on attrition. There was a limit to how much you could do at any one time because you had limited resources – the problem was, it seemed like your computer opponent had no such trouble. Sometimes it would send so many enemies that it felt like it was cheating.

Sure, I know, you had to use strategy to get around it. I guess I’ve never been one for strategy games.

So how does My Little Army compare? 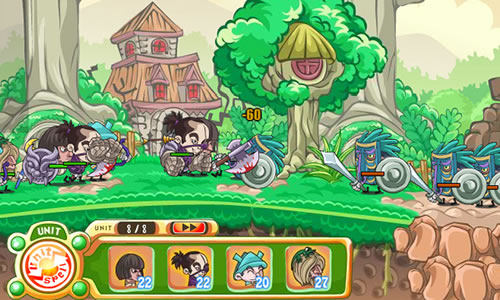 For one thing, it’s much cuter.

It gets a big plus from the start thanks to its fun presentation. You can now see the expressions on your fighters’ faces and the cartoonified graphics are more appealing than the generic fantasy stylings of Epic War.

There is also an entertaining story, something that its predecessor lacked. The fact that it’s nonsensical only adds to its appeal. You choose from three heroes, all of whom want to get hold of the magical Myth Balls – cue lots of jokes about them wanting to grab each others balls. They’re also all complete bastards.

How has the core gameplay changed? Um, it hasn’t. It’s still war through attrition – but there are some very important changes in the way battle is carried out.

For a start, instead of being able to scroll all the way over to see your opponent, much of the stages are in darkness until your army advances far enough. This can lead to some nice “oh crap” moments when you suddenly find an opponent who outclasses the few troops you’ve sent his way. There’s no option to retreat either, which can cause trouble for the unwary.

The other thing is that instead of your opponent spawning whatever enemies he wants, you can see most of your enemies on the map – there is a limit to the number of foes you have to get through, so it never feels unfair. Your enemy can still spawn reinforcements but never so many that it feels like he’s cheating. The enemies are also very polite and won’t charge until you get in range.

You can only spawn eight fighters at a time, and you get a choice between four unit types for each battle. But here’s the best part – instead of the way it was in Epic War, where there was a limited number of units for you to choose from, here you can create your own.

There are three things you have to decide when creating your unit.

1: What type of fighter will they be? There’s a choice of eight fighting styles, ranging from using swords and arrows to more unusual weapons (such as throwing flowerpots – surprisingly deadly)

2: What character will you use? There are dozens of characters to unlock through doing challenges, and all have different stats. Some are fast at the expense of HP, others are strong attackers but are weak defensively. They’re also all really cute (I like the blue elephant – reminds me of another game I reviewed recently).

3: What weapon will you use? There are many to unlock for each style (and of course, you can also buy new characters and weapons at the shop for ridiculous prices). Will you choose something strong or weak?

Does that sound like a silly question? It’s not.

You have a constantly recharging pool of mana that you use to summon your fighters. The more powerful you make them, the more mana they cost to summon. If you make them too strong, you could find yourself in a situation where you don’t have enough mana to call in emergency back-up.

So many fighters willing to die on your behalf.

Whenever you start the game, you get a choice between three characters who represent different levels of difficulty. All of them have different spells at their disposal – you can heal your troops, buff them, or use offensive magic.

Once you’ve completed the game on one difficulty, you can choose new game plus and start on a new difficulty with all of the stuff you gained on the previous playthroughs.

I enjoyed the game so much that I completed it on all difficulties, and I found out something unusual. Hard mode is the easiest.

Sure, there’s no way for you to heal your troops in this mode, but you have access to the two most powerful attack spells in the game.

Poison takes off a percentage of enemies’ HP – in some cases, this can mean several thousand HP per second. Bosses can be destroyed in seconds, while on easier difficulties they could be hour-long slogs.

Add in whirlwind, which destroys anything that’s immune to poison, and you’ve got this game beat.

But what the hell, you’ll have had a lot of fun along the way. 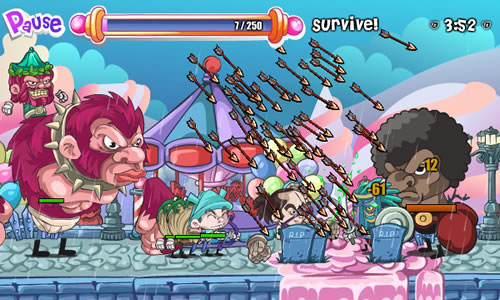 Far more epic than Epic War ever was.