OK, everyone knows Gemcraft. It’s like the definitive tower defence game, massively popular and highly rated by most who play it. If you’re into tower defence games then you should go play it now. Any game in the series, it doesn’t matter which one you try.

I’ll go into that last sentence in greater depth later on, but it’s just one of the reasons why I don’t like it.

To me, Gemcraft is like the sitcom Friends. Whenever I actually sit down and watch/play it I kinda enjoy it, but I dislike the concept as a whole and there’s just far too much of it for me to want to sit through all of it.

There are three games in the series and all of them follow the same plot: you’re a wizard who can create gems that shoot laser balls, go kill monsters.

That’s all you get – no plot development throughout the rest of the game. I have no idea what the endings are and I never will.

Onto the first game: Gemcraft (subtitled chapter one – game maker obviously knew he was going to make a series out of this when he made it). 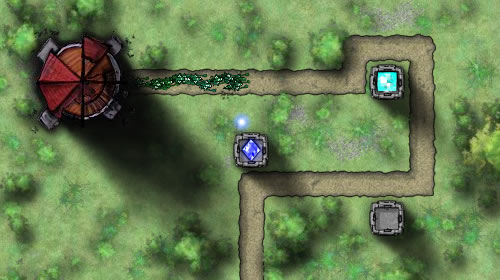 The graphics improve slightly throughout the series, but it’s barely noticeable.

The first thing you will see is a scrollable map, from where you select the many levels on offer. Clicking on the first stage opens up a battle map – beat the several waves of monsters that issue forth and you’ll unlock more stages.

To do this, you’ll need to create gems to place in the towers dotted around the map. Once gems are snuggled in nice and warm in their tower, they’ll start shooting at the monsters that are coming out of their house and are headed towards your house. Your house is obviously much nicer than theirs.

There are several different gem types at your disposal, all of which have special properties. These include increased damage and status effects.

You can combine gems to make them more powerful but each stage of power costs more mana. Combining gems of different colours will give both powers to your new gem, although these abilities will not be as powerful as with a “one colour” gem.

Luckily you have the ability to spend mana within battle to increase your mana limit – this also increases the speed at which you gain it. You can also create new towers to place your gems in and dig trenches to slow your foes down.

The game allows a lot of scope for strategy in your plan of attack – another thing to consider is the fact the mana you use to fight is also your HP. If a monster reaches your hut, you will lose mana – if your mana goes below zero, you lose the battle.

There are also a number of skills that you can unlock to aid you in further battles, such as reduced cost for building things, making your gems more powerful and choosing to start each battle with a selection of pre-made gems.

You unlock these skills by levelling up, which you do by getting points for beating stages. To increase your points, you can speed up the rate the waves come at you.

You can also gain points by gaining achievements.

Each level has a target score to beat, at which point you can say you have truly mastered it. 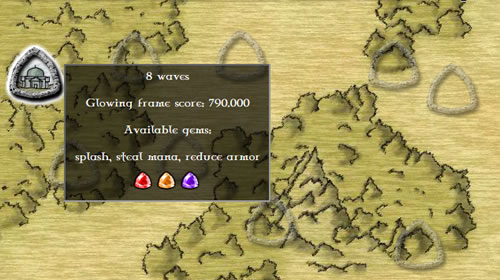 Now do the same for the other 47 levels.

So far, so good. So what’s my problem with this game?

Basically, it proves the point that you can have too much of a good thing. THERE IS SO MUCH OF IT.

If you’ve been playing a flash game for an hour and have barely made a dent in terms of completing it, it’s probably far too big. If there’s some difference in the way each level plays then that’s fair enough – but every level is practically the same. The only difference is in the type of gems you get and the amount of enemies you face, and that’s not enough.

The game is fun at first but I don’t have the patience to get beyond the huge level of repetition, especially when the game length is enough to make most full-priced console games jealous.

Another major problem is the lack of choice when creating gems – your gem types are chosen at random. That can be irritating when you’re trying to build a powerful pure gem, especially on levels where there are several gem types available.

On to the sequel – which is actually a prequel – Gemcraft chapter zero. I don’t know why it’s a prequel. The opening plot seems like it could easily have carried on from first game. Oh well.

This is the battle map. Look familiar? Well, if you’re a fan of the first game you’ll be glad to know that the basic gameplay hasn’t changed in the slightest.

The first thing you’ll notice is how much smaller the game map is. It seems that an important lesson has been learned: less is more.

Then you look at the skills screen: wow, there are a lot more abilities you can learn. Hmm…

Then you look at the achievements screen and it blows your mind. 211 achievements?! For just 14 levels? I’m obviously missing something here.

Click on a level and you’ll discover the truth – each stage has nine different game modes. A quick bout of maths reveals this game has 126 levels – more than three times that of the original (discounting secret levels). 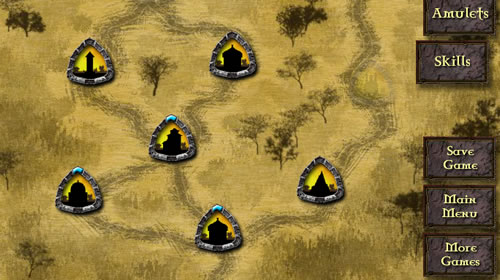 Want to fully complete every map? You'll probably have to play each one about 20 times to get it. It's hard...

Okay, okay. Let’s give him the benefit of the doubt. What are these new game modes?

Sudden death – okay, nice for the hardcore. Beat the monsters within a time limit – good for those who think the battles take too long. Endurance – hell, the entire game is a feat of endurance.

The difference, according to the game forums I’ve read, is a few new objects and this game is much more difficult than the first. Okay.

Obviously, it goes without saying that if you’re a fan of the first then try this. If you’re a tower defence addict with hours upon hours of spare time, you’ll love it.

So what about the newest game in the franchise – Gemcraft Labyrinth? 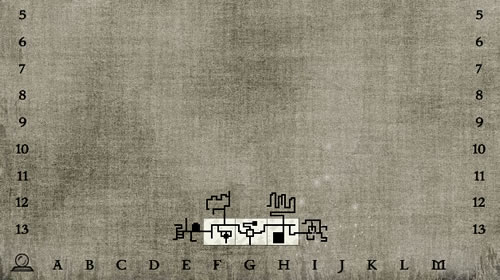 Lots of people have complained about this. My view: the guy has to make a living and I don’t begrudge him that. Any Flash developer with common sense will realise that inserting paid content into a medium that’s free to enjoy will earn them a lot of flack, and they have to decide whether they’re willing to take that blow to their reputation. Swings and roundabouts, really.

The game map has become more interesting. Completing each level will now unlock a new section of the maze – for Gemcraft aficionados, I can see that’d be a lot of fun to play through.

Gemcraft lovers will also be pleased to know that there are now 169 levels! Yaaaay no way I’m playing through all that.

Ignoring my problem with length (and I’m not talking about my penis), how does the game differ from its prequels?

The achievements now work as score multipliers rather than just giving you bonus exp.

You can now adjust each battle’s difficulty settings to increase your score multiplier – you can alter things such as the number of monsters and how strong they are.

There are more skills available and some of them are quite interesting (the wild gem ability seems fun, if I had the hours needed to get to a level high enough to use it).

The latter two are affected by the premium content option – the very best skills and settings have to be paid for. If you have no interest in paying for them, try to ignore them for the several weeks it’ll take you to finish the game. 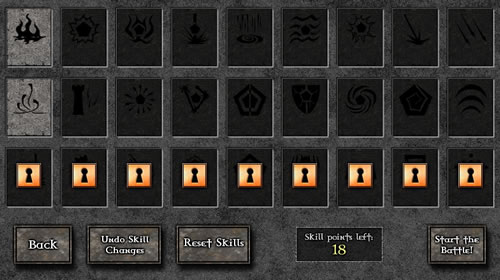 All those abilities, locked away forever.

Now whisper this, but there has actually been some improvement to gameplay. You can create new types of attack towers, including one that increases the power of any built around it. These existed before, but now you can make them yourself.

The monsters no longer attack straight away, giving you time to plan out your strategy.

And you can finally choose what colour gem you want to create! Finally! In addition, you can unlock more colours than the individual stages initially give you.

The final addition is the gem anvil, which acts as a shortcut device that enables you to play much faster.

For my money, these new additions make this the best Gemcraft yet. A few people have said they prefer the originals for various reasons, but in my opinion the more options you have to change the samey gameplay, the better. 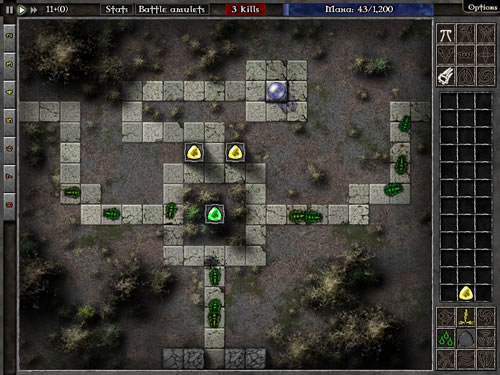 Definitely the best of the series, but I'm still not a fan.

So there you have it. Three games, all incredibly similar, all incredibly long to play through, all beloved by people who enjoy tower defence games. They’re just not for me.

I should probably have mentioned at the start that I don’t like tower defence games, shouldn’t I? Whoops…

There are a couple of games in the genre I do like though. I enjoy Pokemon Tower Defence, but that’s not on this site so, um, forget I said that.

One tower defence game that I do love is Cursed Treasure, which is on this site. I’d talk more about it here, but this review is already far too long.

Which is kind of apt, considering the game that I’m reviewing…

Prepare to lose all your free time: GemCraft Series