Have you ever accidentally run over a bunny rabbit?

If so, you are responsible for the death of thousands.

Roadkill Revenge shares gameplay elements (and the last name) of the crash events in Burnout Revenge. In a nutshell, you control a homicidal group of animals intent on avenging the death of their bunny friend who gets squished in the opening cutscene.

They have decided to fight fire with fire and have somehow created their own vehicle of death to cause massive crashes and pile-ups, spreading death and misery to humans.

It seems like a bit of an overreaction for the death of one bunny. Perhaps he was royalty? And don’t ask me how the animals managed to create a remote-controlled car. They obviously hold engineering lessons in the countryside. 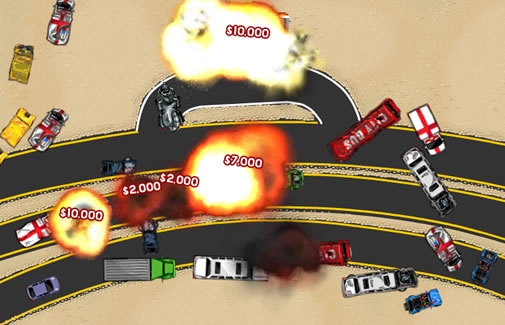 Don’t question it, just enjoy the fireballs of death.

Each of the 40 levels (with an extra five to be unlocked) have traffic going about their daily routes. It’s up to you to send your vehicle into the midst of it and cause a chain reaction of accidents.

There is a decent variety of vehicles, ranging from various cars to buses, trains, oil tankers and more, and they all explode when they take a certain amount of damage.

Every level has a primary goal, which is usually to destroy a set amount of cars, cause a set level of financial damage (each vehicle is worth different amounts) or destroy a specific vehicle.

There are also buildings dotted around some levels. Two of these have special properties when destroyed: gas stations cause a violent explosion, sending vehicles flying across the screen, and traffic control buildings turn traffic lights on, causing vehicles to ignore their own safety and race forward regardless of what’s in the way.

Each level also has two secondary objectives, which are usually harder to achieve but if you complete them you gain bonus points that can unlock extra levels.

You don’t have to complete these bonus objectives at the same time, but you do have to meet the primary goal or they won’t count. 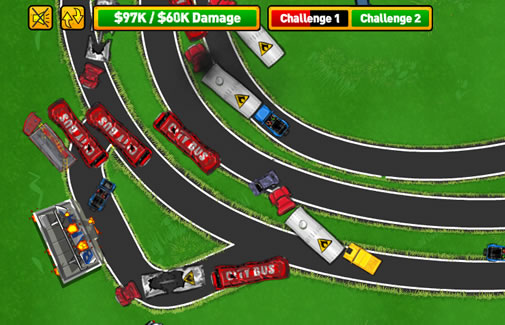 The two boxes next to your goal fill up with green to show your progress.

This game is a lot of fun and a great way to blow off steam. The graphics are decent and the sounds are good (and the voices aren’t annoying, which is always a plus).

The game mechanics are well-executed as well – the vehicles feel quite weighty, which means your little car won’t be able to bash the larger trucks around so easily. Quite a few of the levels require a bit more strategy than just firing your car straight into traffic and hoping for the best.

But there are some problems.

For a start, vehicles are not damaged by explosions – you can only destroy them by forcing them to crash into each other. This can be frustrating when an oil tanker explodes right next to a car and sends it flying, only for it not to hit anything and remain intact. I demand more realism in games about homicidal wildlife with rocket cars!

You also get situations where the vehicles’ momentum can force crashed cars off-screen, meaning you get no points.

But the biggest problem is the random factor involved in deciding what cars appear onscreen. In levels where you have to destroy a certain vehicle, if you fire off your rocket car quickly there is a chance that your target won’t even appear. Instant fail. 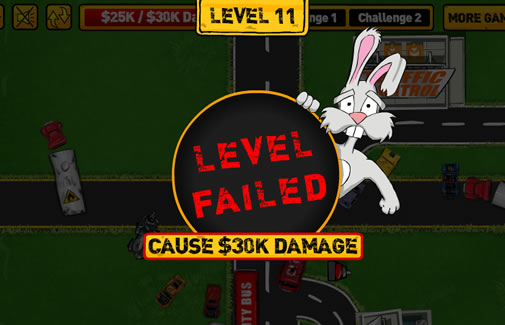 But despite these issues, the game is definitely worth a go. Levels don’t take long to play and the restart button reduces frustration. If you really can’t beat a stage, there’s even a level skip option.