Prepare for a tale of mystery with lots of platform puzzles thrown in for no particular reason.

The Invisible Trousers is set in a detective agency, where four sleuths (whose trousers are all invisible) have to work out which of their number killed the agency’s fifth member.

To find the killer, you have to travel up through the agency building’s gravity-defying floors. There are 24 levels in all, though some of these are just empty rooms where you can read dialogue from the other characters. They give clues as to who the murderer is. 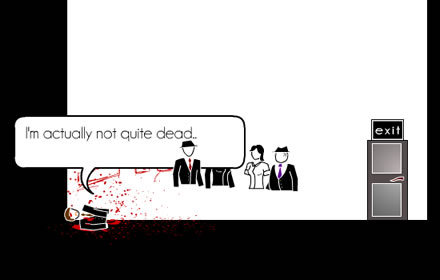 Don’t worry, he’ll be quite dead by the end.

The bulk of the game is made up of platform levels – the game is very simplistic and uses only three separate elements to build its stages.

There are deadly spikes, as seen in every other platform game ever made, which are the only hazard you’ll face.

The main thing to look out for are the rounded corners – these indicate that you can shift the direction of gravity simply by walking round it. So if you’re on the floor and there’s a rounded corner leading onto the wall – well, you get the picture.

The door that leads to the exit on each stage can only be opened when you’re standing the right way up, so getting to the exit is only part of the battle.

The other element is one-way platforms – you can go through them in one direction, but there’s no way back. 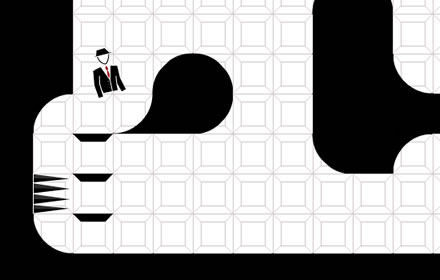 This guy has to deal with this stuff every day. He’s probably fired the architect.

This game has a simple concept and a good sense of humour (as well as tuneful music, but I feel obligated to mention that because the maker seems so proud of it).

There are some disappointing things though.

When I was told I’d have to find clues to work out who the killer was, I thought I’d have to make a decision at the end and use my basic sleuthing abilities. Sadly this is not the case – the killer is unmasked automatically.

The game is also too easy. There are quite a few training levels at the start, which are good for getting players used to the unusual gravity, but the difficulty never really picks up enough for my liking. Level 24 is the only one that is relatively complex, showing what the game could have been.

I realise that the game has been made easy to play through so people can zip through it and see the multiple endings, but some extra levels would have been appreciated. If it had to be kept short, perhaps some of the levels could have been randomised, so it’s at least a little different with every playthrough. 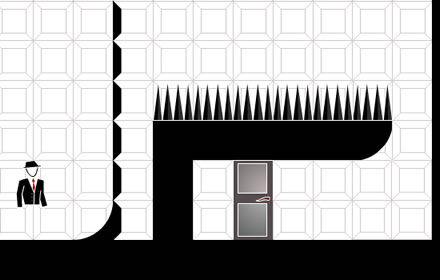 These are this guy’s greatest foe. Not that they’re much cop. Look at them, they’re just sitting there.

These are minor gripes, though. If you’re pressed for time then this game is fun and easy to zip through. The sense of humour may be enough to encourage you to see all the endings – although there is the option to just reload your game from the last stage if you want to do that.

Try it now… wait a minute, why the hell are their trousers invisible?

Guess we’ll never know: The Man with the Invisible Trousers