I love levelling up.

It’s quite a nerdish thing to admit to but I enjoy watching my stats rise as I go through a game, enabling me to take on bigger and badder foes as time goes on.

There are times when levelling up doesn’t work though, and then it becomes a chore. It becomes grinding, the worst kind of levelling up.

You are forced to go over the same levels over and over again, beating the same foes repeatedly, all so you can move on to the next stage.

Grinding is normally the point when levelling stops becoming fun; when it forcibly stops the gameplay and tells you to repeat stuff for a couple of hours, wasting your time.

However, there are games where grinding is actually really good fun. 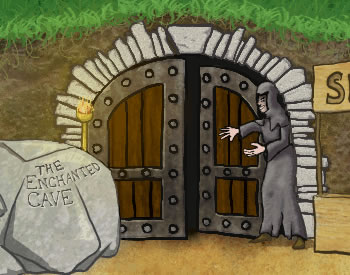 And this is a perfect example.

The Enchanted Cave is all about grinding and therein lies its charm. The entire game is based around making your character stronger so you can progress.

You play as an adventurer who has stumbled upon an enchanted cave and decides to explore it, because that’s what adventurers do.

There are 100 levels in all but it’s going to take you several plays to get strong enough to reach the end.

Fortunately there are save points every ninth level where you can enter a shop screen and buy new stuff from the ever-cynical merchant. Whenever you reach a save point you will continue from there whenever you start a new game - but there’s a catch.

But this is an incredibly smart move on the part of the game maker – it stops you from over-stretching yourself and getting to a restart point where the enemies are too hard for you.

Instead, you have to choose your tactics every time you start off. Will you make an effort to beat 20 levels and reach a new save point, or will you focus on finding new items and improving your stats?

As you make your way through the cave, one of the chests you open will give you escape wings. These are vital as you can use them at any point to get out of the cave when you’re about to die – and if you die, you lose everything from that play through.

There is another hitch that adds to the challenge.

Whenever you use the escape wings to get back to the title screen, you lose all of the items you have collected. The only things you keep hold of are golden items that you pick up from the rare golden treasure chests and the stat boosts you gain from picking up crystals.

These golden items are vital, because they are the only pieces of equipment that you can use from game to game. Some may not be as powerful as other items, but it’s important not to sell them off.

The crystals will improve basic stats such as health, magic, strength and so on.

Now for the combat – you didn’t think the cave would be empty, did you? 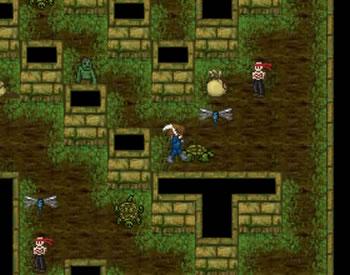 Here you see our hero in a life-or-death struggle with a turtle.

The battles are very basic – the enemies remain static and will only attack when you walk into them. Unfortunately for you, they often just happen to be blocking your path.

Fights are basically a war of attrition. You hit him, he hits you, one of you drops dead.

There are attack spells to use, but to be honest they’re useless. The fights are over in a blink of an eye, and you’ll want to use your mp on healing spells anyway.

It is fun though. Sadly the challenge drops off in the second half of the game. You’ll struggle to progress through the first 30 or so levels then streak straight through the last 40 or 50.

There are some other minor niggles: the staircase that takes you down to the next level can be difficult to spot in some stages, some players say they found it hard to use items (drag them onto your character) and some say the load game button doesn’t work. I can’t vouch for that, because I never died. You have to be very careless to die.

There isn’t really any replay value either – once you’ve beaten level 100 with your most powerful items, there’s nothing that can touch you.

If there had been a “game plus” mode, with the enemies made much stronger, or and endless mode, maybe there would be a reason to play again.

But that doesn’t matter because the game is great as it is and it’ll certainly last you a while.

Grind away: The Enchanted Cave