Before you ask, this has nothing to do with Michael Winner’s most famous film, Death Wish. It’s much more violent than that.

Unfortunately, like Mr Winner, it can occasionally be very annoying.

The script is good though. It casts you as a mysterious protagonist who is at the mercy of the game’s creator, who gets his kicks by sending you up against impossible odds and laughing when you fail. Is he a villain or just a total jerk?

Either way, you’ll have fun finding out. The script has some good jokes and takes the piss out of the usual clichés of side-scrolling shooter/platformers.

The core action is fairly basic. You have a gun, you can move around and jump, and bad guys want you dead.

You earn cash and experience for each kill. The cash can be used to buy better armour, weapons and gadgets. The experience levels up the current gun you’re using and levels up your character, giving you more health and opening up the all-important perks. 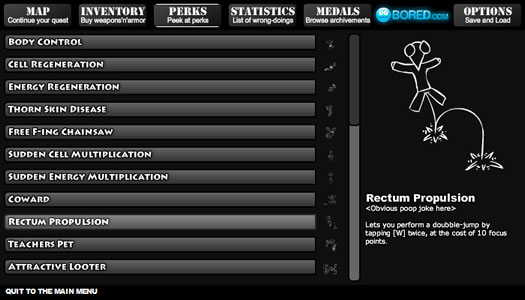 These perks are vital for completing the game. There are 59 in total, but before you finish the game you have a level cap of 30 so you have to choose wisely.

The perks range from improving your weapons and boosting your health to vital skills such as the double jump and an extra chance.

Your health also restores fully every time you level up, which is a lifesaver. In fact, I haven’t been able to beat the last level without using this tactic.

There are 25 levels full of enemies to defeat. These range from biting beasties to generic humans with lightsabers and guns. They get easier to beat the stronger you get, but there are still some that will give you real trouble (Agent Smith, I’m looking at you).

Each level also has a little challenge to beat as well, such as defeating all the enemies with one weapon or killing them all in a certain way. Beating these unlocks yet more goodies for you to strengthen your character with. 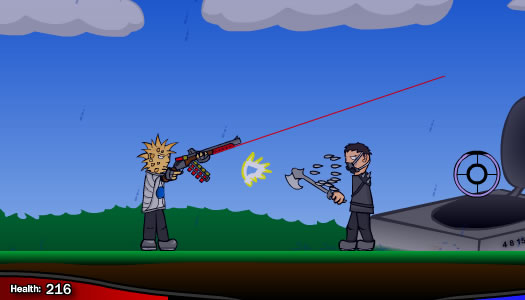 Soon you’ll be an ass-kicking machine! Which still faces the possibility of getting its ass kicked…

The weapons are all very useful and fun to kill stuff with, which is just as well. Even the bog-standard pistol gains an interesting ability when it’s fully levelled-up.

My favourite weapon is the super powerful shotgun, but a special shout out should go to the Big Kaiser that fires buzzsaws and the S-AIDS Spreader, which gives your enemies, um, Super AIDS. Nice!

However, the chainsaw is quite possible the crappest weapon in a game ever. You have to get so close to the enemies that they’ll just end up smacking you.

I also had a problem with the gadgets. There are only two that give you good effects without also having major drawbacks.

A couple of examples: The Health Transmitter randomly drops health pick ups. Great, but if you don’t catch them you lose health and if you rush past enemies to reach it you get hurt more than it heals by.

The Active Barrier can shield you briefly, making any damage you take heal you. But whenever it’s inactive you take double damage and get completely destroyed.

So the gadgets are more hassle than they’re worth. Annoying. 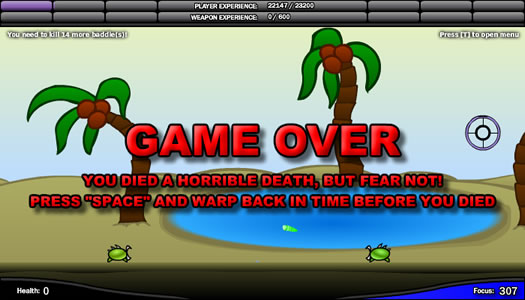 My laptop isn’t top of the range, sure, but it’s rare that I find a game with such lag.

Without the lag, the game is great fun. If you like kicking ass and taking names, with a fair few chuckles along the way, this is the game for you.

If you complete the game, level 26 opens up. You have to fight 100 Agent Smiths and the only way to win is by constantly getting your health recharged by levelling up.

There is also a survival mode (masochist difficulty), which is as hard as you’d expect. 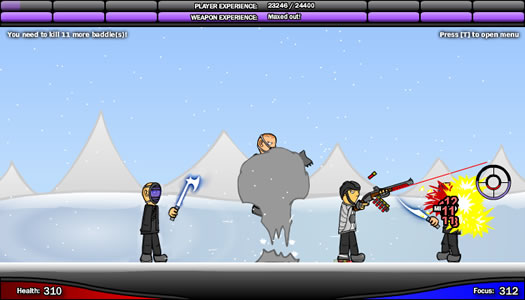