The game title tells you just about everything you need to know about this game.

You are a hero, dropping vertically (mind you, if there’s any time when you’re dropping horizontally then it’s quite possible that the laws of physics have collapsed in on themselves and the end of days is nigh).

This is a fun little platformer where you start out as a normal kid at the top of a long, vertical level.

Your goal is to reach the bottom without being killed by the various enemies and spikes along the way.

You can kill enemies by bouncing on their heads, Mario-style (don’t try that on the spikes).

But that’s not all – the “heroes” aspect of the title comes in when you find various warriors locked in cages as you go down. 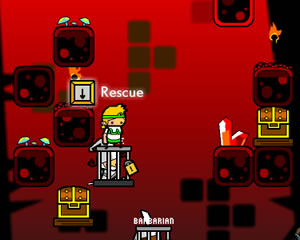 There's quite a few to choose from.

Unlocking the cages and freeing the heroes gives you access to that warrior’s powers.

The five warriors are much what you’d expect from a dungeons and dragons game, the typical fantasy-style heroes. Some can shoot, some have swords that allow you to kill enemies just by walking into them. All have different levels of speed and jumping prowess.

Ranger: fires arrows with a range of different effects.

Thief: has a teleport move.

In all of the levels there is a points target to reach. You can achieve this by collecting the treasure inside chests and killing enemies. You can also get a combo bonus for unlocking cages with the same types of heroes in them.

Reaching this points target gives you an extra life.

Completing normal levels gives you a key to explore temples, which have princesses inside who you need to rescue, but all levels are solved by falling to the bottom.

You also earn achievements and artefacts, which is where the game gets more interesting. 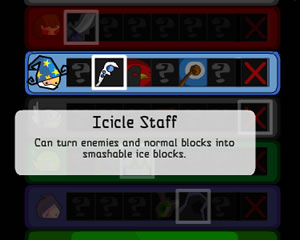 Earning achievements gives you masks and hats for your standard character to wear.

One thing I’m not sure about is whether these actually do anything. I’m sure one or two of them made me jump higher, but it’s unclear.

The artefacts are another story. You get them for beating points targets and saving princesses, and they act as a new power for your five heroes.

Each hero has six powers, but only one can be active at any time.

What’s surprising is how much this can change the way you play with them.

The barbarian can either deflect missiles back at enemies, making him more tactical, or gain a move that makes him teleport to every enemy on-screen and destroy them, making him a killing machine.

The ranger can use his arrows to turn enemies into health potions or gain a triple shot move.

It’s good fun practising with these different techniques and finding which one works for you.

However, there is one technique that you will always want equipped because there is a slight flaw that reduces your scope for experimentation. 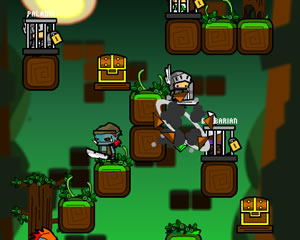 Remember when I said this guy was mainly useless? Prepare to find out the one thing that makes him useful.

And this power is the only reason I like the paladin. His jumping height is terrible. TERRIBLE. Sure, you can destroy blocks underneath you with a stomp, but it’s too easy to get stuck with him.

Getting stuck is a problem in this game.

Each level is randomly generated and sometimes it will create a level that can’t be beaten. Thankfully this is rare but it’s annoying when you have to kill yourself.

Another slight issue is you often have to take leaps of faith with no way of knowing if spikes are below and little way of saving yourself if there are.

The game is easy though, so lives shouldn’t be a problem.

I haven’t mentioned the bosses yet: they’re fun enough, but mainly just serve as a distraction from the main game. 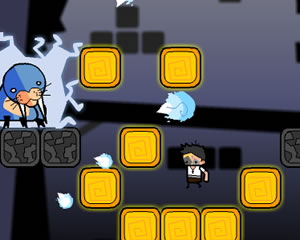 It'll be dead in seconds.

This game is great fun. I didn’t unlock all the masks and artefacts in my first time playing, but I find that I keep coming back to it for another go and to add to my inventory.

It’s best for it’s pick up and play factor. Hey, if you want to save a princess but don’t have time to play Mario or Zelda, just give this a go.

Save the princess: Vertical Drop Heroes