The original Electric Box was a neat little game that saw you using various elements to try to complete a circuit of electricity.

You could link up the circuit by sending power between items such as kettles and steam detectors, water tanks and water wheels, and lasers and energy collectors.

By keeping the energy moving, eventually you would reach your target and activate it. 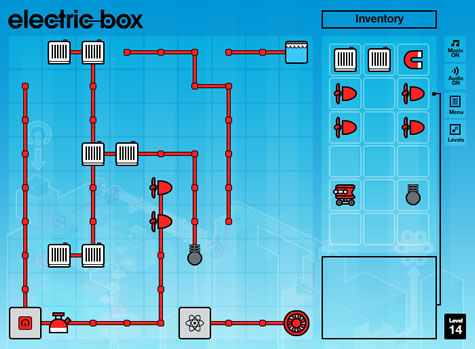 There were various other elements to play with as well, such as magnets and chargeable batteries, which would keep each level fresh.

A new element was introduced more or less every level – a few people didn’t like this because they wanted to play around with the items that had already been introduced a bit more, but I found that it really kept my interest in what was a clever little puzzle game.

The sequel has expanded on the original in every way.

The first thing you notice is the graphics are far superior to what they were before and the game is much more colourful. The music is also better – there are three relaxing tunes instead of one electro tune, which is much better for helping you to keep your cool.

This game is a headscratcher.

There are 40 levels compared to the 15 there were before and even more elements to play with.

Each one has been meticulously put together so there is only one solution. In fact, the creator has changed a few levels since the game was released after people found shortcuts and ways of finishing that he hadn’t thought of.

This also means that quite a few walkthroughs out there will be out of date now. 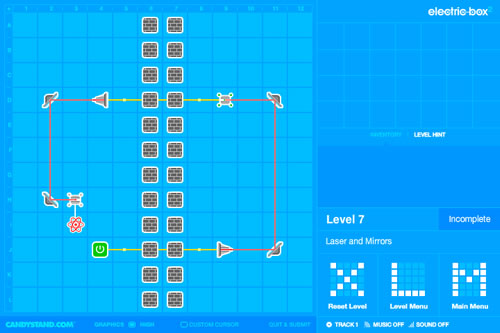 Despite this annoyance for the terminally stuck, the difficulty is also a vast improvement on the original.

The first game was less than half as long and most of the levels were easy to work out. There was no real need for experimentation because the solutions presented themselves so readily. The same can definitely not be said for this game.

It’s relaxing and frustrating at the same time because there are some levels that you’re just not going to be able to work out on the first try.

However, it has that certain factor that makes you want to keep playing until you beat it, damn it!

The game keeps track of how long it takes you to beat each level and this decides what your score is. Only problem with that is if someone memorises the solution they could easily go on a massive speed run and top the leaderboards. If they’ve got that much time on their hands…

As I said, the game has several new elements to play with. Here are some of my favourites:

See that brown thing in the wheel? He’s a hamster. He rocks.

The game now has power sources that operate independent of electrical current. For example, give the hamster some food or music and he’ll run, producing power for you.

There are also more ways of destroying things, with the innovative cannon blasting stuff down for you (be sure not to kill the hamsters).

The game also has all manner of new vehicles, transporters and teleporters, and some levels actually have cool and unique moments in them, something that you couldn’t say about the first game.

If you want a cool puzzle game that’ll kill at least an hour, you can’t go wrong with this. Add in the fact that there’s a whole community of user-made levels (for this and its prequel) and you’ve got limitless fun at your fingertips.