Everybody loves gambling, don’t they?

What other reason could there be for the profusion of poker sites you can find on the internet? British daytime TV is filled with adverts enticing people to visit bingo sites and other internet gambling dens so they can win their fortune and leave their life of drudgery behind.

Or lose it all, get stuck into a never-ending cycle of debt and eventually die in a brothel.

Either way is fun, right? It’s all about the thrill of risking what you have on another spin of the wheel or one more hand.

For those who don’t fancy risking it all, there are the good old fashioned one arm bandits. Now I’ve never really understood the appeal of these machines. The entire game is based entirely on chance. Sure, you can hold a few reels and there are bonus features, but there’s no skill involved.

Admittedly, this is true of all gambling games – that’s why it’s a gamble. The problem that flash games have when it comes to emulating this is that this randomness works against the fun.

It can seem like the computer is programmed to make you lose. Another problem is there’s no money to win, so what’s the point? 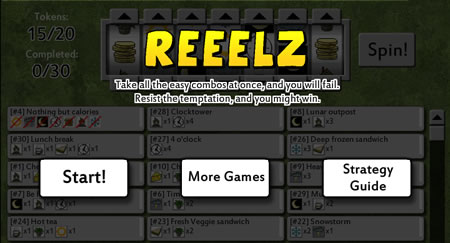 Reeelz is a take on the one-armed bandit games. There are seven reels (or reeelz, I suppose) and 11 different symbols.

Beneath the reels there are between 30 to 150 combinations of these symbols, showing you what you need to be aiming for.

But rather than these being ways of scoring imaginary coins, these combinations actually make up a list that you have to cross off to win the game.

So in the easiest game, you get given a list of 30 combinations and you have to get every single one to win.

To make your job easier, you can hold as many of the reels as you want and nudge them as many times as needed.

There are five levels of difficulty, going up by 30 combinations each time. 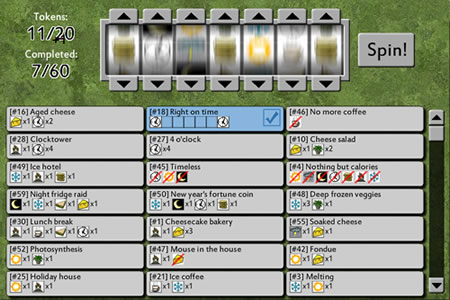 Will lady luck smile this time?

Of course, you are given a limited number of spins. Wouldn’t be any challenge otherwise.

After you spin the reels, you are shown which combinations you have matched, while the others are ordered as to how close you are to reaching them. The hardest ones are listed the highest.

If you run out of spins, you die. When you complete a level, you are rated on the number of spins you have left.

All of this makes for an incredibly fun game. Unlike any other gambling flash games I’ve played, there’s actual a point, there’s a goal.

It’s addictive enough to keep you playing to the end, then go back to each stage to get the highest possible rank.

If you had to pay money to play the game, you could develop a worrying gambling problem.

Well, it would be worrying if the game wasn’t so easy. 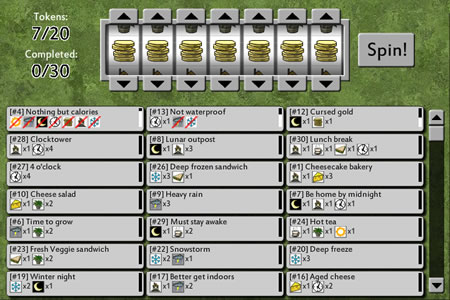 KER-CHING! By the way, those are coins, not pancakes.

Each of the combinations have amusing titles too.

For instance, #149 Hot veggie deluxe meal is a sandwich, a plant, a coffee, a cheese and a sun.

#124 Forest clearing is when you have a plant on the first, second, sixth and seventh reels.

And my favourite is what I reckon this game is: #45 Timeless, when there are no clocks, suns or moons on the reels.

Gamble your life away: Reeelz