So, Cursed Treasure. Probably my favourite game in a genre I dislike – tower defence games.

So many of these games just seem the same to me. For those who don’t know anything about the genre (though it seems hardly possible), these games see you trying to protect a stronghold or object against an army of enemies.

To defend yourself, you normally place a series of towers that shoot these guys down – each kill giving you cash to buy more towers. The only method of attack your enemies have is… um… walking straight into whatever it is your protecting.

Correct me if I’m wrong, but I’ve never seen a tower defence game where the enemies try to destroy the towers – you know, the things that are killing their allies left, right and centre. No matter how fearsome your foes are in a tower defence game, they’re always in a suicidal rush.

In Cursed Treasure, your foes are driven by suicidal greed. The items that you’re protecting in this game are powerful gems.

The first way in which this game differs to some of its genre is that you don’t get hurt if your foes reach the objects you’re protecting – they simply grab a gem and start to run away with it. If you kill them, they drop it – although another enemy will pick it up if you don’t stop them.

Oh, another difference – in this game, you actually play the bad guy. Yep, you’re a demon overlord fighting off the forces of good who are trying to take away the source of your power. Not that this has any effect on the gameplay however – some cutscenes would have been nice. 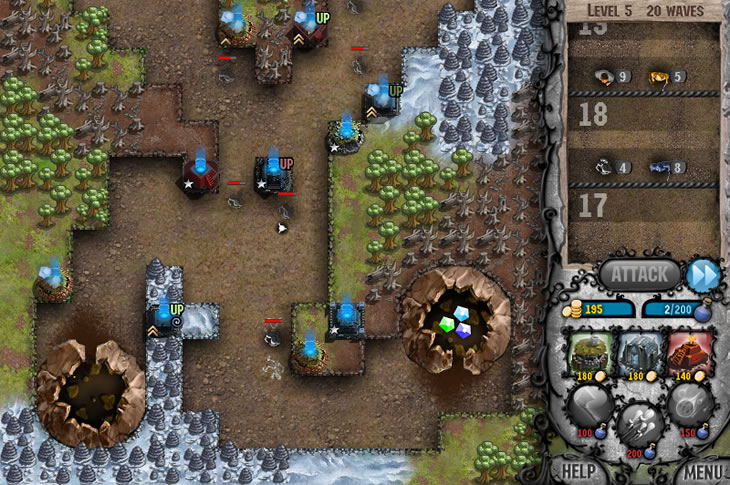 Lose all your gems, lose the game.

There are only three towers that you can build but these offer more strategic choices than you would think. For a start, they are all well balanced – each one has advantages and disadvantages.

First is the den, which fires arrows that instantly attack your foe. They offer middling damage and have average speed.

Second is the crypt – these fire powerful missiles that slowly home in on your foes. Unfortunately, you’ll have to wait for them to charge up before they attack.

Last is the temple, which fires a continuous stream of fire. This doesn’t do much damage but it hurts your foes much more often than the others.

There are limitations as to where you can place these towers – each one can only be placed on a certain surface. Dens go on grass, crypts on snow and temples on rock. Good job the weather in this world is so schizophrenic – there are plenty of spots dotted around every map for your temple of choice.

Deciding where to place each tower so it does the most damage is only one thing to consider. There are certain spots that will increase your mana regeneration rate if you build a tower there – mana is limited and is used to cast tactical spells. You can also build a tower on high ground, which will increase its damage and range. 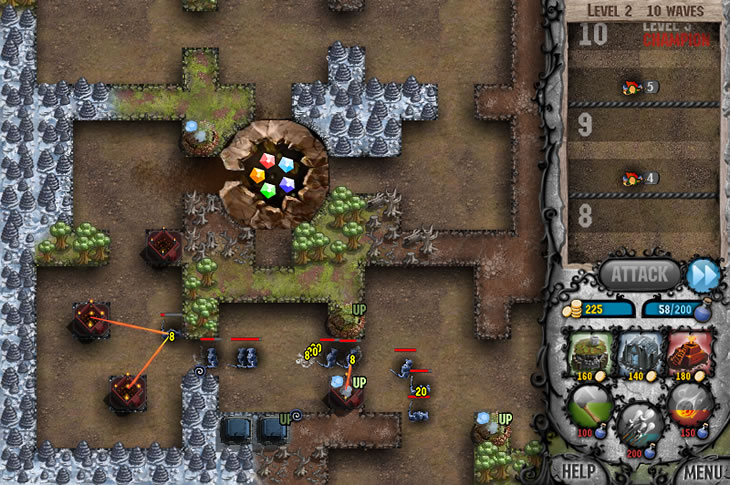 Make the right choices and those goody goodies won’t even get a sniff of your gems.

The more times a tower attacks, the more experience it gains. Once it accumulates a set amount, you can upgrade it for a fee. Get it to a high enough level, and each tower has two new versions that you can transform them into. This gives you six types of tower to choose from – again, all well balanced.

You can level up as well by gaining experience from battles. Each level up gives you skill points that you can invest in skill trees – one for each tower. There are dozens of abilities on offer and a scarce amount of skill points, so you’ll have to plan ahead. The best skills are only available once you’ve invested a set amount of points into a skill tree, which means the other towers will be missing out and getting weaker in comparison to your favourite.

Each skill tree has an effect on your towers’ attributes depending on how many points you invest in them. For instance, points put into the temple skill tree will improve damage.

All of this is the main reason why I prefer this game to other tower defence games. The strategies you need for success are simple to understand and can be tailored to suit your own style of play. All tower defence games involve a strategy of some sort but (and I speak as someone who is crap at these games) they tend to have limited choices in the strategies you can use. 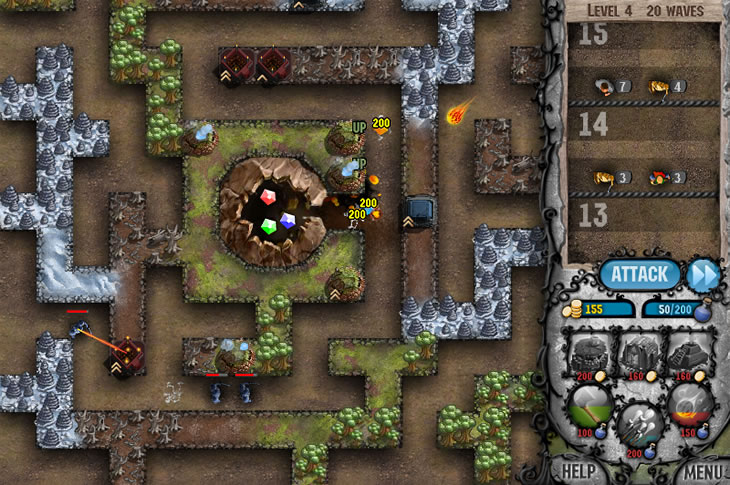 No matter what tower you choose as your favourite, your chances of success will remain the same.

Having said all that, this game is easy as piss. A tower defence veteran shouldn’t fail any level on their first try.

However, just surviving isn’t the point. To get the best rating, you’ll have to complete every level without your foes even touching your gems.

This is harder but… ah, it’s still easy. That’s probably why it’s so much fun.

Oh yeah, there’s a sequel that’s come out recently. Aside from the different maps, it’s exactly the same as the first. The game’s creator Iriysoft knows how to give the people what they want.

The sequel does fix a few bugs and the most annoying enemy has been altered. Instead of dodging half of your attacks, the samurai will now randomly take only half damage. Much less frustrating for those going for a perfect game.