Danger! This game may make your head asplode.

When I first booted this thing up it didn’t really look like anything special. The graphics do the job they’re supposed to but to be honest they’re pretty bad.

The music is pretty dull too and the concept may put some people off straight away. The idea is there are a number of islands that all have to be connected to each other by bridges. You build these bridges by clicking on the links between the islands.

Each island has a number and you complete the level when you have connected the corresponding number of bridges to each island. So, say if there were only two islands and they both had the number two, then you simply build two bridges between them and bang! Job done.

Another thing to remember is you can only build two bridges per linkway. So if you had an island with the number three on it, you can’t build all those three bridges linking to just one other island. 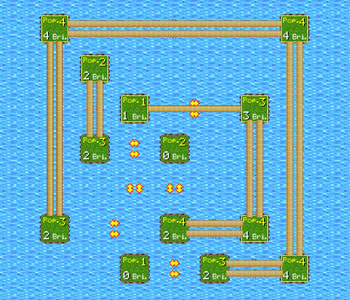 It doesn’t look very exciting, does it? To be truthful, it’s not – but that doesn’t mean it’s not fun.

There’s more to it than this. None of your bridges are allowed to cross, and every single island has to be connected to each other. That is to say, you should be able to walk to each island by using a bridge. No swimming allowed!

There are basic tactics you can use to help you get started on each level. For instance, if you have an island with the number 4 on it and it only connects to two islands, then obviously those two linkways must each have two bridges on them.

If you have an island with the number three on it that links to two islands, each linkway will have at least one bridge, so you can put those in and work out where the third one goes later.

I may have made that sound more complicated than it really is, but the game is really simple to play once you get into it. You start seeing how things have to slot together and slowly work through the levels.

There are 30 levels in all and when you get past level 10, things really kick up a gear in terms of difficulty. 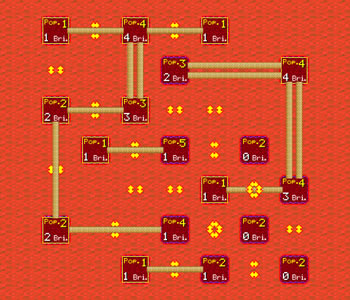 LOOK AT THAT. Ouch, my brain hurts.

Things get trickier and trickier, but this is where the fun starts. The music at this point matches the speed at which the gears in your head are turning, as you try to work out how the hell you’re going to solve each level. On every one, there is a key island that has only one possible solution and you just work backwards from there.

If you like brain teasers, this should really appeal to you. I wasn’t that impressed with it at first but the more I played it the more it grabbed me. It’s basic but it’s a top puzzler, probably one of the best I’ve played for a while.

I eventually completed all the levels, but in the process my brain exploded... 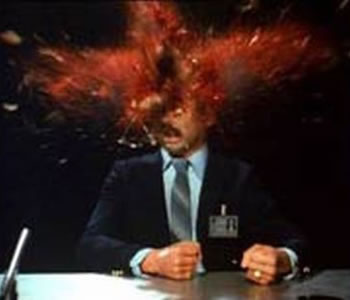 Blow your mind: King of Bridges